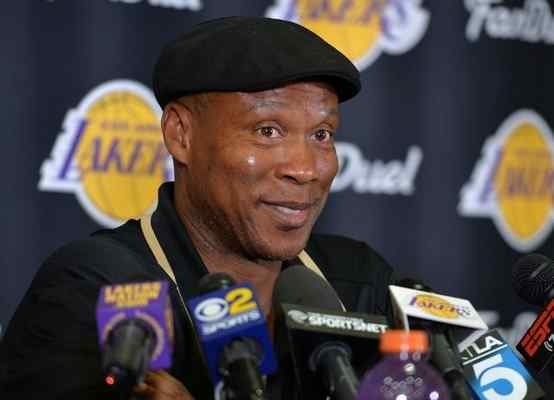 After overseeing the Lakers finish with their worst record in franchise history for two consecutive years, Byron Scott will not coach the Lakers in the 2016-17 season, according sources familiar with the situation.

It is not immediately clear who will replace Scott or if any of his assistants will be retained, including Paul Pressey, Mark Madsen, Larry Lewis, Jim Eyen and Thomas Scott. The Lakers lost out on potential coaching candidates after mulling Scott’s future for the week. Those possibilities included Tom Thibodeau (Minnesota) and Scott Brooks (Washington). Possible replacements for Scott could include Golden State Warriors assistant Luke Walton, former Rockets and Knicks coach Jeff Van Gundy, UConn coach Kevin Ollie and San Antonio Spurs assistant Ettore Messina.

Though the Lakers finished with a 17-65 record, second worst in the NBA, they had sympathy for Scott amid the numerous challenges surrounding the 2015-16 season.

After facing season-ending injuries for three consecutive seasons, Kobe Bryant nursed nearly season-long soreness in his right shoulder. Although he played 66 games, Bryant averaged 17.6 points on a career-low 35.8 percent shooting and often did not know his playing status until just before tipoff.

The Lakers were also mindful of how they assembled their roster, which featured an intriguing core of young players and newly arrived veterans.

Yet, Kupchak declined to offer any vote of confidence for Scott on Feb. 17, 2016. Instead, Kupchak only cited that Scott remains under contract. During his exit meeting, however, Kupchak added that the Lakers normally evaluate everyone, including coaches, after each season.

Still, Scott faced season-long criticism on a number of fronts.

During his introductory press conference two years, Scott vowed to revamp the team’s defense after former Lakers coach Mike D’Antoni oversaw a team that ranked 29th out of 30 NBA teams in points allowed (109.2) and 24th in defensive field goal percentage (46.8).

Scott also faced varying degrees of support and concern internally about how he handled the Lakers’ young players.

Some lauded Scott’s no-nonsense approach. He yanked the starting spots from Russell and Randle 20 games into the season amid frustration with both the team’s slow starts and their consistency. Scott rarely dialed back the intensity of his practices during the season. He never hesitated to critique them both privately and publicly.

Some found the approach counterproductive. They thought it inhibited the young players’ growth and confidence. Scott’s continuous support of Bryant and other veterans also sent mixed signals on both how he would hold all of his players accountable and divide up playing time.

Kupchak deferred to Scott on how he handled roles and praised him for his demanding expectations. Yet, Kupchak conceded uncertainty how that approach affected the Lakers’ young core. Nonetheless, no Lakers player publicly questioned Scott’s methods despite various sentiments suggesting frustrations at times with his approach. Bryant and Metta World Peace often supported Scott, too.

“I know he’s hoping that he coaches here forever,” Kupchak said of Scott during his exit meeting. “But a lot of times, what we do, is we’re really preparing for the next GM or the next coach, and that’s tough sometimes.”

Despite lack of assurances, Byron Scott “absolutely” believes he will coach Lakers in 2016-17 season

Lakers’ Mitch Kupchak more optimistic about rebuilding than in past seasons
Follow L.A. Daily News Lakers beat writer Mark Medina on Twitter and on Facebook. E-mail him at mark.medina@langnews.com