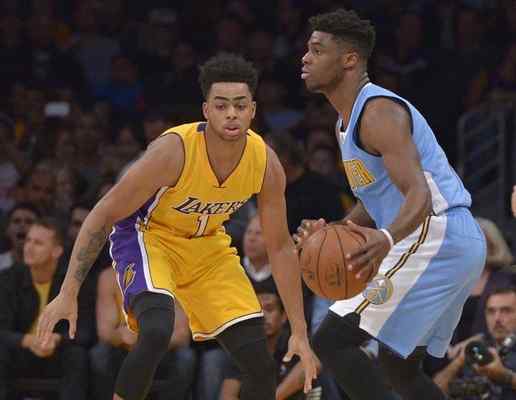 With the ball in his hands, Lakers point guard D’Angelo Russell could arguably face a number of decisions with every possession. Should he take advantage of his offseason focus in the post and work in that area? Should he use his court vision to find an open teammate that an opponent has not noticed? Or should he rely on his emerging outside shot?

All of which has given Lakers coach Luke Walton an intriguing puzzle to sort out once training camp begins on Sept. 27.

“As a coaching staff, we’ll push him in the right direction as far as what we see he should be doing at that time,” Walton said in a recent interview with Southern California News Group. “But ultimately, you want him to be able to recognize that stuff on his own.”

“Kobe knew if we were playing like [crap] that he would score and carry us until we started playing better,” said Walton, reflecting on his 10-year NBA career that was mostly with the Lakers. “That’s why we always had a chance. It’s a skill that can be developed and is something our coaching staff will be in constant conversation about. That’s something we’ll see [D’Angelo] get better at as the years go on.”

Lakers coach Byron Scott had mostly resisted toward granting Russell that kind of freedom during his rookie season for a number of reasons. Scott maintained that Paul entered training camp his rookie season in New Orleans (2005-06) knowing all of his playbook, while estimating that Russell knew only 20 percent of it. Scott often argued Russell resorted toward making fancy passes over simple ones and favoring the pick-and-roll over ball movement. And Scott admitted and allowed Bryant much more liberty with his shot selection during the final season of his 20-year NBA career because of his credentials.

Scott then took away Russell’s starting spot 20 games into the season for reasons that included his dissatisfaction with his play, work habits and maturity. But once Russell reclaimed his starting role nearly two months later, he showed signs of growth. He posted a season-high 39 points against Brooklyn and famously proclaimed he has “ice in my veins.” He averaged 15.1 points, made 38.3 percent of his 3-point shots and posted 3.3 assists per game. He also looked more comfortable running the offense with both increased freedom to call plays and without Bryant’s shadow looming.

Although the Lakers wanted more passing and defense from Russell in Summer League, he offered plenty of highlights. He averaged 21.8 points on 47.7 percent shooting, 6.3 rebounds and 4.0 assists through five games. He made a game-winning 3-pointer against Philadelphia. He played with more joy and creativity than in his rookie season.

“He’s ready to take the steps forward in this league toward becoming a leader, becoming a top point guard and competing every single night,” Walton said. “There’s a lot of growth to be had still. But he showed me he wants three things. He wants to be great. He wants to win. And he wants to lead. That’s what I want out of a point guard.”

Walton also wants Russell to know how to run the offense as he sees fit.

“That’s something he’ll have to learn,” Walton said. “Obvoiusly, he’s not going to nail it every time. It’s a skill like anything else.”

But it’s a skill Walton believes Russell could eventually perfect both with a mix of guidance and freedom.