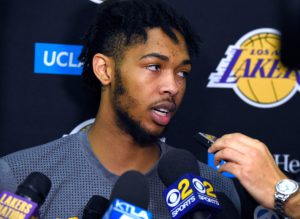 LAS VEGAS — In a city that has thrived on tourists making questionable decisions, the Lakers decided it was not worth the gamble on compromising a significant long-term investment.

The Lakers formally shut down second-year forward Brandon Ingram for the remainder of Las Vegas Summer League after suffering a cramp in his right leg in Friday’s summer-league opening loss to the Clippers. The Lakers said Ingram will likely stay in Las Vegas to train and practice with the team, but he will sit out beginning with Saturday’s game against the Boston Celtics at Thomas & Mack Center.

When Ingram suffered the cramp late in Friday’s game, Lakers president of basketball operations Magic Johnson told Ingram and the Lakers’ coaching staff from his courtside seat that Ingram would have to miss the subsequent overtime period. Though Ingram downplayed the injury afterwards, the Lakers still wanted to be cautious.

“That is fine,” said Lakers assistant Jud Buechler, who is the team’s summer-league coach. “We need to protect him.”

Ingram was already expected to sit out at the end of Summer League after originally planning to play at least the Lakers’ first three summer-league games on Friday (Clippers), Saturday (Boston) and Monday (Sacramento). The Lakers then have at least two more games at a day and time to be determined based on results. The Lakers then could play in the summer-league playoffs beginning next weekend.

Still, Ingram showed plenty of growth in the Lakers’ summer-league opener. He posted a team-leading 26 points on 9-for-17 shooting with three assists, three steals and two blocks n 31 minutes.

“I got back to where I played youth basketball and Duke basketball,” Ingram said. “It was fun being a players coach.”

The normally stoic Ingram seemed more vocal both in commanding the ball and harping on teammates for mistakes. Lakers second-year center Ivica Zubac joked Ingram is “talking too much” after Ingram chewed him out over a defensive assignment. Ingram added, “I want to get a little bit more out of him. I know what he’s capable of. I want to see him go in there and dominate the basketball.”

Buechler has found the Lakers listening to Ingram because of a specific reason.

“He realizes this is his team out here this summer. I’m hoping that’s going to transfer into our team,” Buechler said. “I think he’s ready for that next step in leadership. Leadership is a lot of different things. Guys have to respect you about your work ethic. I think he has that. He has to get on the court and earn that on the court.”

Ingram earned his keep on the court.

The Lakers designed plays for Ingram as he dominated with his improved footwork and post-up moves. Lakers rookie point guard Lonzo Ball threw what he called “a perfect pass” for an Ingram lob only 20 seconds into the game. After working on his shooting form with Lakers assistant Brian Keefe, Ingram looked more comfortable with his jumper.

Meanwhile, Ingram said he has grown in an unspecified amount of weight and height. With all the comparisons Ingram sparked to Warriors forward Kevin Durant, Ingram joked, “Maybe I’ll grow to KD’s height.”

“I told myself I wouldn’t weigh myself until end of the summer,” Ingram said. “I’ve been in the weight room faithfully and I’ve been eating. I don’t think it’s all about what looks on the outside. I feel stronger.”