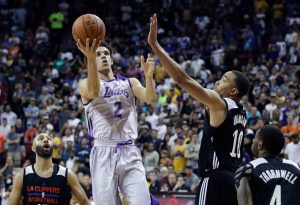 LAS VEGAS – Lakers rookie guard Lonzo Ball will not play in Monday’s summer-league game against the Sacramento Kings because of a sore right groin, according to a league source familiar with the situation. The Lakers later announced that rookie forward Kyle Kuzma (cramps) would sit out after already ruling out rookie shooting guard Josh Hart (sprained right ankle) and shutting down second-year forward Brandon Ingram (cramps). The Lakers also listed rookie center Thomas Bryant as probable after experiencing soreness in his left knee.

Ball originally had a groin injury last week practice before Summer-League play, the source said. Lakers assistant coach Jud Buechler, the team’s summer-league coach, had mentioned on Friday that Ball was “banged up” in recent days. Ball then felt soreness after playing on Friday and Saturday, the source said. Nonetheless, the Lakers do not consider the injury serious, and are taking precautionary measures.

The Lakers (0-2) have not formally shut Ball down for the remainder of summer-league play. The Lakers have at least two more games to play and a possibly postseason appearance if they win at least one game. But it would not be surprising if the Lakers rule Ball out for precautionary reasons. The Lakers had shut down Ingram for summer-league play after he nursed a cramp in his right leg in the opener on Friday against the Clippers.

Ball’s absence strips away a potential rematch between the Lakers’ No. 2 pick and No. 5 pick De’Aaron Fox, who had scored 39 points against UCLA in the NCAA tournament. Fox tweeted out an emoji of a facepalm, a post that was soon quickly deleted. Ball also loses the chance to build off of his play that has fielded mixed results.

Yet, Ball also offered promising signs with his passing and ability to run the offense. After logging five assists, four rebounds, two steals and a block against the Clippers, Ball recorded a triple-double against the Celtics with 11 assists and 11 rebounds. That marked the first triple-double in Las Vegas Summer League history since 2008 when statistics were recorded consistently.