Terrell held his own against Bishop Amat following the loss of Darrion Willies, who left the game early due to an injury. 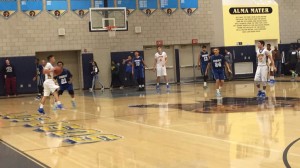 Willies returned to the game, but gave his coach a signal that he was not able to play and returned to the bench. Despite not playing in the second half, Willies scored nine points for the Skyhawks.

This was a different look by Summit, aside from the obvious loss of Willies for the game, compared to the last time I saw them play, which was against Ramona High in the semifinals of the San Bernardino Kiwanis Tournament.