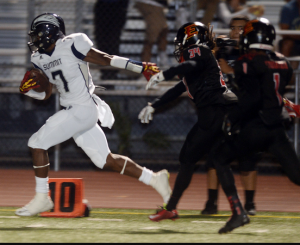 “Not at all,” Carr said when asked whether his commitment to USC has changed.

Members of the Trojans staff has reached out to several of its commits including Carr to touch base.

In the meantime, other programs have continued to show interest in the Fontana Summit High athlete.

Carr holds six scholarship offers after he received an offer from the University of Georgia on Monday.

Just received my 6th offer from the University of Georgia ⚪️#GoDawgs pic.twitter.com/mEdZ5Ses7M

He also holds offers from Arizona, Colorado, UCLA and Washington.

As of now, the junior is unsure whether he will make any campus visits.

“We will cross that road when the time comes and we will see what happens then,” Carr said.

As far as a return to the USC campus, Carr said there is no official time set up.

“It’s honestly all random when I go since they are so close (to where he resides),” he explained. “But since it is (high school) football season I will probably only be able to go up there on game days.”

Carr enjoys his trips to the campus and stated that he looks forward to the opportunity of joining the Trojans’ program.

“Well when I go to the games, the vibe from the coilseum is amazing. I can’t wait for that (moment),” he said. “I know that everything up there will not be given to me and I will have to work for it and battle everyday. I really want to see what type of athlete they will turn me into.”