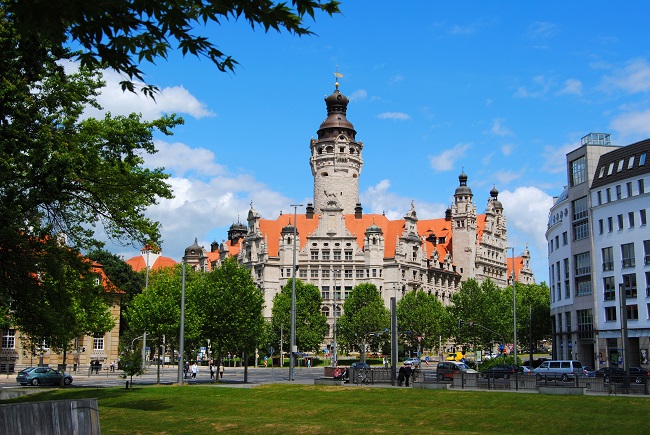 The imposing New City Hall has been the seat of government since 1905. (Photo courtesy of Leipzig Tourism and Marketing)

Leipzig’s  imposing New City Hall has been the seat of government since 1905. It is opposite the city library on Leipzig’s ring road.

The 36-story City-Hochhaus, at 466 feet tall, is the tallest building in Leipzig. Owned by Merrill Lynch, the building was designed by architect Hermann Henselmann to resemble an open book.

By now everyone was hungry, so we went to Auerbach’s Cellar, probably the best-known and second-oldest restaurant in Leipzig. One of the city’s most important wine bars by the 16th century, it was described in Johann Wolfgang von Goethe’s play “Faust I” as the first place Mephistopheles takes Faust on their travels.

Auerbach’s Cellar sits below the Mädlerpassage shopping arcade in Leipzig’s historical district near the market. It has five historical dining rooms. 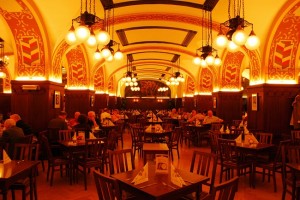 According to legend, the alchemist Johann Georg Faust rode a wine barrel from the cellar to the street, something he could have accomplished only with the help of the devil.

By then the tykes were tired, so we didn’t get to see some of the other famous attractions, including the botanical garden, which is the oldest in Germany; and Leipzig’s zoo c, which covers 56 acres with 850 species. The zoo is known worldwide for its carnivore exhibit. The zoo has bred more than 2,000 lions, as well as 250 rare Siberian tigers.