— UCLA broke away from the way its two-by-two quarterback rotation for the first time this spring, but it still didn’t technically eliminate anyone from the race. Instead, Jerry Neuheisel, Josh Rosen, Asiantii Woulard and Mike Fafaul each got a turn running the first-team offense in 11-on-11 scrimmages.

No one in the group really had a bad day, but again, Rosen stood out. His feel in the pocket has been excellent through spring, and he looks particularly impressive rolling out to his right and throwing downfield. On one such play, he connected with running back Roosevelt Davis about 30 yards down the sideline. He also made a great throw to Thomas Duarte, squeezing the ball through a tight window on a play in which the receiver didn’t really look open until he actually made the catch.

The timing of some of the plays counted for something too. Rosen was able to get the offense out of third-and-long on his first series, after the offensive line backed him up with back-to-back false starts. There was a healthy crowd out watching from parking lot 8 today, and broke into applause more than once.

Woulard was the runner-up in the competition today, putting in arguably his best showing as a Bruin. He had a long touchdown to Aaron Sharp, and seems to have also developed good chemistry with redshirt freshman Jordan Lasley. (Lasley, who has gotten in a few fights this spring, kept his emotions in check today despite a bit of chippy play from cornerback Denzel Fisher.) He also was part of what might have been the day’s most thrilling play — a pass that Mossi Johnson reeled in with a diving one-handed grab. 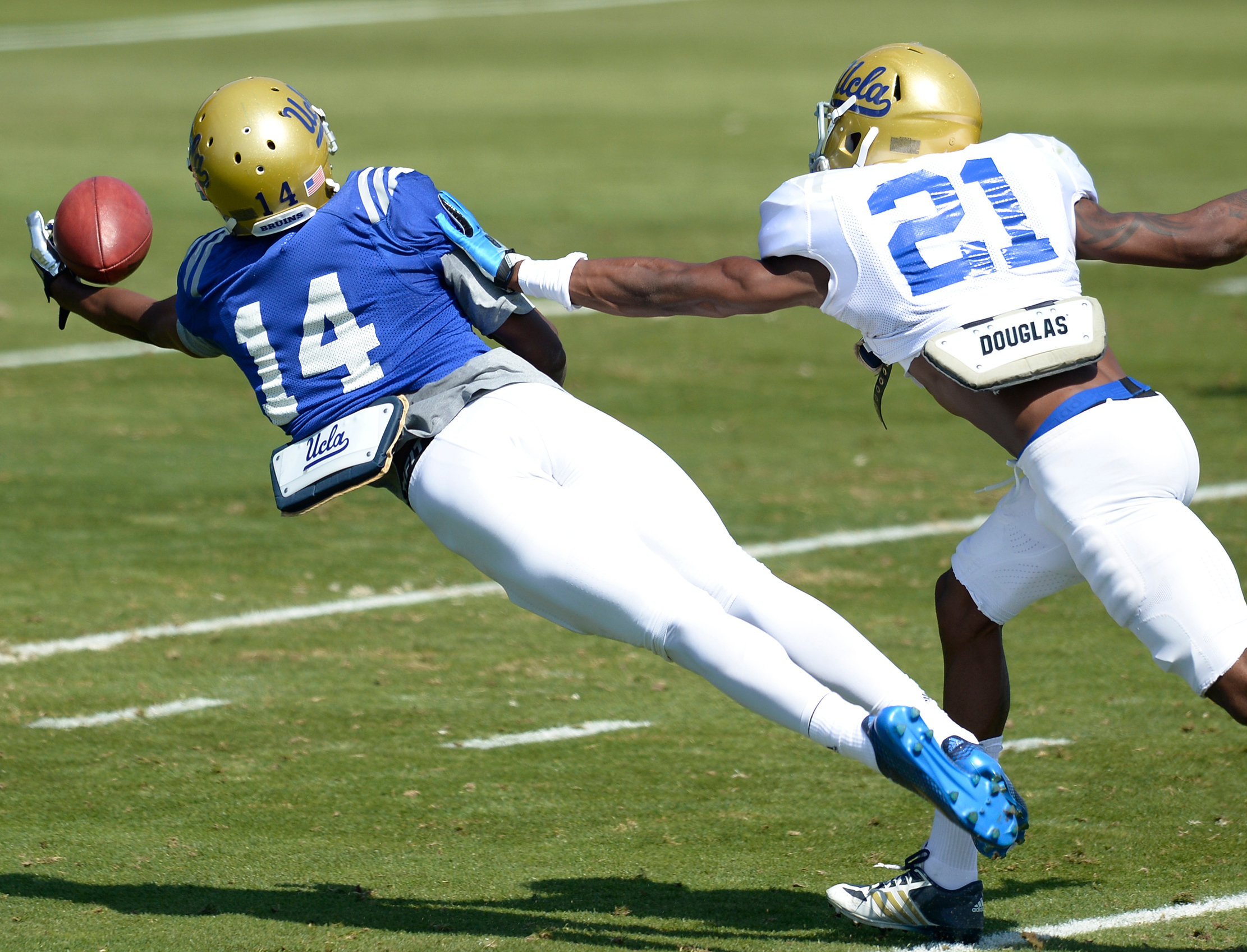 Mossi Johnson pulls in the catch of the practice on a pass from quarterback Asiantii Woulard. (John McCoy/Staff)

— Sophomore Alex Van Dyke looks like he’s developing nicely after burning his redshirt but playing sparingly last season. While I’m not sure if he’s on track for a full-on breakout this season, he’s made some nice grabs in the last few practices.

The 6-foot-3 receiver also said today that he’s up to 216 pounds now, after initially arriving on campus at around 200.

— Running back Craig Lee had a bit of a mixed performance. He started slow and had trouble identifying open lanes, but strung together a few good runs toward the end of practice. The trouble for him has always been mental more than physical, and it remains to be seen if he can grasp the nuances of the position enough to carve out a role this season.

Nate Starks had a good day, and was the target of a lot of screen passes from Josh Rosen.

— On defense, Kenny Young and Cameron Griffin performed well. The former had one nice pass breakup, and the latter maneuvered past the offensive line at least once for a sack.

— NaJee Toran looked a bit out of place initially on the defensive line to start the spring, but has looked more comfortable in his new position as of late. The redshirt freshman has always played with a nasty streak, which serves him well going up against bigger guards. UCLA needs depth on the interior of the defensive line, and Toran’s development there could help.

— UCLA’s practice soundtrack is usually a mix of classic rock and hip hop, but the first two tracks today were Frank Sinatra’s “Fly Me to the Moon” and the Temptations’ “My Girl.” Defensive coordinator Tom Bradley said afterward that Jim Mora included those as a bit of a dig at him.