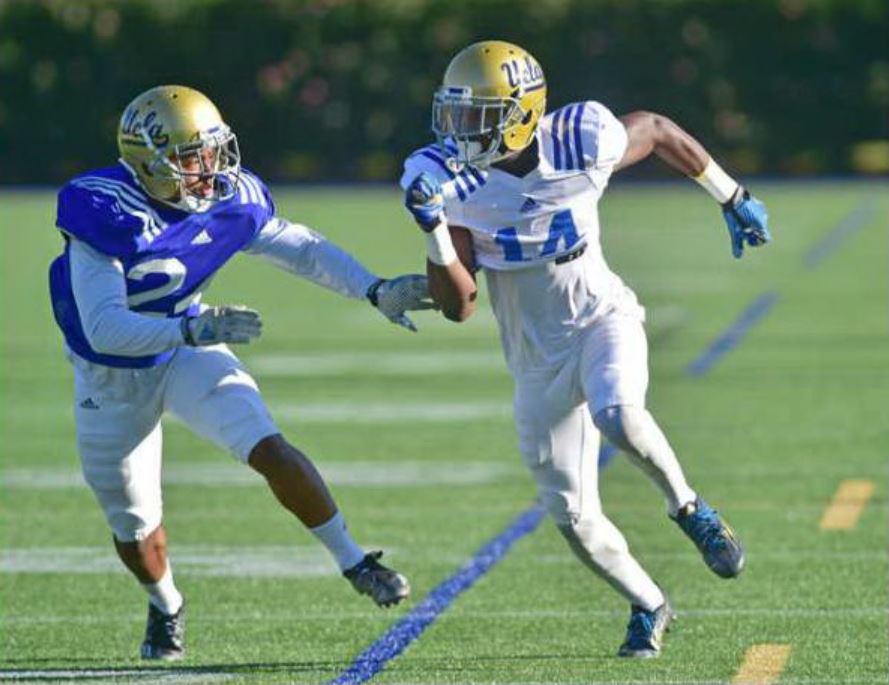 There is a notebook  HERE about Theo Howard, who made his media debut Wednesday, and the returns of Mique Juarez and Josh Woods.

Here is a photo gallery of the day’s practice from our photographer Brad Graverson.

— The defense looked like it had some trouble getting lined up at times on the goal line. It’s likely a result of some new plays that were just installed. Linebackers coach Scott White had to physically place Juarez and Lokeni Toailoa in the necessary positions for one play.

— An interesting sequence I noticed was in a red zone situation when the offense ran down the middle twice, which prompted White to call his defense “soft as (expletive).” The defense then responded with sack from Nick Terry on third down.

— Eldridge Massington had one of his best days of camp, catching a pass from Josh Rosen to covert a fourth down during the first 11-on-11 period, then catching a touchdown pass from Matt Fafaul in the second team period. He also hauled in a catch from Rosen with a defender hanging on him in the second period.

— Bolu Olorunfunmi had some good moments Wednesday, including a great jump cut that led to a touchdown in the red zone in 11-on-11. However, he was not free from Kennedy Polamalu’s scorn as Olorunfunmi got chewed out for trying to cut back in a goal-line situation. Polamalu called it “selfish” and “high-school running” to cut back on the goal line.

— Josh Woods, who was back in full pads after dealing with a hamstring injury, looked a step slower than a lot of his teammates, especially during one-on-ones. He got beaten on back-to-back reps, including a turn in which fullback Ainuu Taua put him on skates and got free for the touchdown. While it was a “rusty” first day back, Woods has been working at a variety of positions and said after practice he is learning the weakside and mike linebacker positions in addition to the nickel and dime spots. (Read more about it in the notebook HERE.)

— At 300 pounds, Taua has shown surprising athleticism many times during spring. To add to his one-on-one victory over Woods, he stiff-armed Octavius Spencer to the ground on a run to the left side during the team period and nearly made it to the end zone for a long gain.

— While Ishmael Adams dropped a pass in the back of the end zone during the first 11-on-11 period, he ended up catching a touchdown on a similar route over Denzel Fisher on the final play of practice.

— Theo Howard made a nice grab over Randall Goforth during one-on-ones.