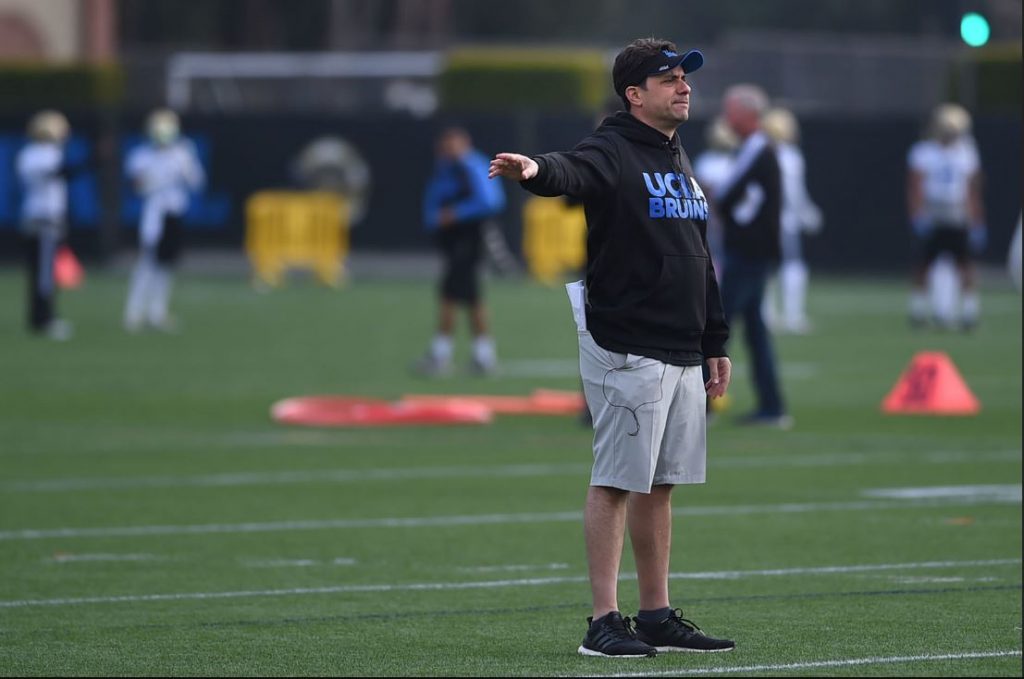 Jedd Fisch made his first in-person comments Thursday as UCLA’s new offensive coordinator after the Bruins wrapped up their second spring practice. Again, he shied away from trying to label his offense. It’s just offense, he insisted, and all he wants to do is move the ball.

Wide receiver Darren Andrews described Fisch as a stickler who is detail-oriented and demanding, but in a good way.

“You do it his way or it’s the highway,” Andrews said.

Here are my notes/observations from the day:

— Fisch is said to have brought a huge playbook with him to UCLA. The playbook is thicker than the one Kennedy Polamalu introduced last year, and Polamalu’s offense was described as extremely complicated already. (Noel Mazzone did not have a playbook at all.) Fisch said the team has a long way to go when it comes to learning his whole playbook, but has been introducing it gradually. There were several moments early in practice when you could tell players are still trying to grasp the new terminology. When the receivers failed to run the appropriate routes, he called upon the group’s leaders, Andrews and Jordan Lasley, to demonstrate the right routes, then had the group run them again. At one point, Fisch physically steered Andrews on the right path, pushing the receiver across the middle of the field while he ran. Alex Van Dyke made a fingertip catch on a long pass, but when he came back to the line of scrimmage after the play, Fisch sternly told Van Dyke that he ran the wrong route and was instead supposed to run a post.

— Safety Brandon Burton spent a day with the linebackers, going through individual drills. While working through footwork drills toward the early portions of practice, linebackers coach Scott White teased the former Serra star who seemed to be laboring a bit, saying, “Are you tired, Burton? It’s a whole different ball game over here.” Burton made an impact on special teams last year, but is still facing an uphill battle at safety with Jaleel Wadood and Adarius Pickett pretty much locked into the starting spots. Burton, who was listed at 6-foot-1, 200 pounds last year, has shown a knack for making plays on the ball in his short UCLA career and might just be in search of a way to get on the field any way possible. Similarly, the coaches moved DeChaun Holiday from defensive back to linebacker last year during training camp and Holiday is now in the mix for a starting spot at the strongside linebacker position.

— Mossi Johnson got some time at defensive back. The receiver was one of the players mentioned last year by defensive backs coach Demetrice Martin when Martin was asked who he might poach from the offensive side of the ball for his group if he had the chance. In general, spring is a good time for coaches and players to experiment with potential position changes to improve personnel flexibility in the event of weird injuries.

— Play of the day goes to Theo Howard for a one-handed grab in 7-on-7s near the sideline. The receiver stretched out and reeled in a catch after gaining just a sliver of separation from DB Colin Samuel.

— Jacob Tuioti-Mariner got a would-be sack on Josh Rosen during the first 11-on-11 period, then batted a pass from backup quarterback Matt Lynch down at the line of scrimmage on another drive.

— Lynch was QB2 on Thursday after fellow redshirt freshman Devon Modster got the chance Tuesday.

—Keisean Lucier-South also got a would-be sack on Rosen during the second 11-on-11 period. When the play continued, Rosen compounded the misfortune by throwing an interception to Josh Woods, who jumped to snag a ball Rosen was trying to lift to the receiver near the sideline.

— Van Dyke had a good catch on a long throw from Rosen in a team period, fighting through strong coverage from John Johnson.

— In the team’s offense vs. defense competition, position groups paired off and ran 20-yard shuttle races. It was defensive linemen vs. offensive lineman, running backs/tight ends vs. linebackers, receivers vs. defensive backs and quarterbacks vs. specialists. The linebackers vs. running backs/tight ends were some of the most visible races from the viewing area and the linebackers mostly crushed the competition. Woods and Kenny Young especially stood out.

— Mique Juarez was mixed in with the first-team defense during 7-on-7. Although he has a long way to go physically, the opportunity to play with the starters, next to Young and Woods, could be a good confidence-builder for Juarez.

— Najee Toran is likely the team’s second-option at center, but he and fellow backup center Gyo Shojima seemed to struggle with their snaps Thursday. They repeatedly fired low shotgun snaps to Lynch and Modster.

— Stefan Flintoft continued to take the first punts of the day, closely followed by Austin Kent.

— The punt returners were Andrews, Lasley, Alloway and Darnay Holmes. Andrews generally got the first attempt. When Holmes got his turn, he was kicked a shanked punt, but he caught it on the run by scooping the ball seemingly off his shoelaces.

— J.J. Molson was perfect on his four field goals, while Andrew Strauch and Crawford Pierson each made two out of their four attempts.