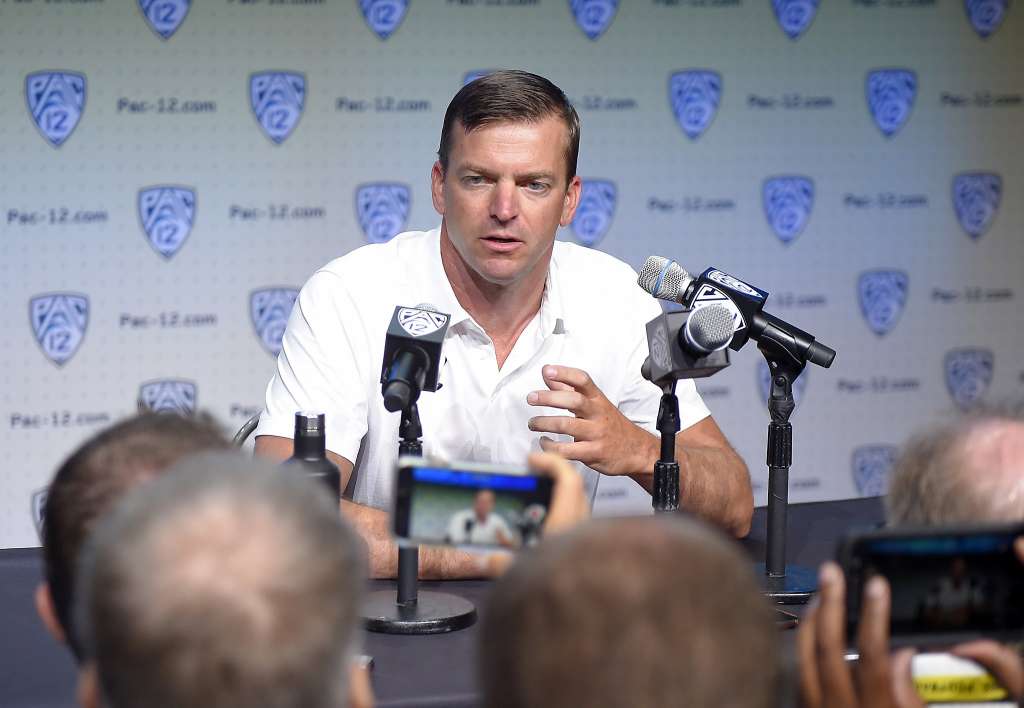 Justin Wilcox, shown speaking at Pac-12 Media Days in July 2017, has Cal challenging for a bowl game during his first season at the helm. (Photo by Mark J. Terrill, Associated Press)

Cal was voted to finish last in the Pac-12 North, but the Golden Bears, in their first season under head coach Justin Wilcox, have exceeded many expectations by challenging for bowl eligibility. The winner of Friday’s game reaches the six-game threshold and earns itself a postseason opportunity.

Wilcox, a former defensive coordinator at Washington and USC, helped turn Cal’s defense around quickly this season. The Bears were the Pac-12’s worst scoring defense last season, allowing 42.6 points per game, but have jumped to seventh with 28.3 points per game allowed this year. They forced seven turnovers in their 37-3 upset over Washington State on Oct. 13.

The offense has been inconsistent with redshirt sophomore Ross Bowers at quarterback, but got a boost from running back Patrick Laird last week as he rushed for 153 yards and one touchdown against Stanford in Cal’s rivalry game.

Laird scored a 1-yard touchdown run with 4:02 left in the third against the Cardinal that helped cut the deficit to three points, but both teams were held scoreless in the fourth and Stanford came away with its eighth straight win in the Big Game.

UCLA’s one loss to Cal in the past four seasons came last season in an ugly 36-10 regular-season finale in Berkeley. The Bruins were held to just 10 points and 84 rushing yards against what was then the second-worst rushing defense in the country. The 10 points were tied for a season-low for UCLA, putting a fitting punctuation mark on a season defined by offensive ineptitude.

The redshirt sophomore is in his first year as Cal’s starter after backing up grad transfer Davis Webb last year. He is fourth in the Pac-12 in passing yards per game with 254.3.

Laird’s 153 yards against Stanford was the most rushing yards for a Cal player against the Cardinal since 2009. He averages 6 yards a carry.

The Cal defense has lost many of its top playmakers including star linebacker Devante Downs. Kunaszyk has stepped up in Downs’ place and leads the team in tackles despite only playing in eight games.