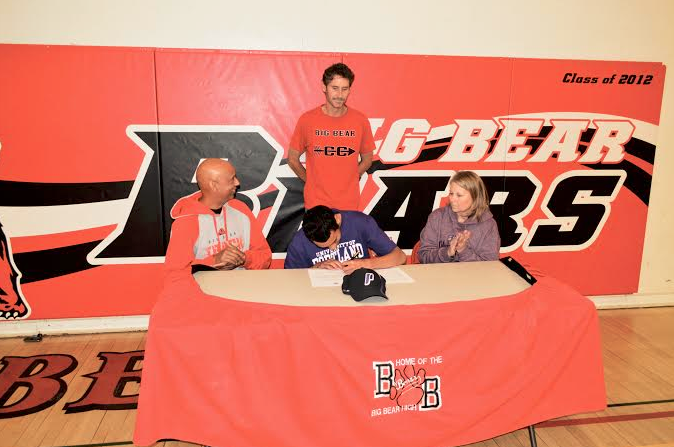 The two-time All-Sun Cross Country Runner of the year and two-time CIF State cross country champion has decided where he will run in college.
Big Bear senior Caleb Webb signed his National Letter of Intent last week to run at the University of Portland.
“It’s a smaller school and I come from a small town,” Webb said. “It felt like the right place. It’s nice to get this off my back.”
Webb said he was deciding between Portland and Colorado as to where he would sign.
“Caleb may be the most significant recruit we have ever signed,” Portland coach Rob Conner in a press release. “He is a tremendous student and extremely serious runner. Very few high school runners are ready to make an impact at the college level as freshmen but Caleb is the kind of talent that will. I couldn’t be more excited to have him joining us. … His range is incredible but we think he will lean toward the longer distances,”
Webb recently set a school record by running a time of 8 minutes, 52.17 seconds in the 3200 meters, surpassing the record of 8:55 set by Olympic marathoner and fellow Big Bear native Ryan Hall.

Although he didn’t win that race at the Arcadia Invitational, his time in the event is the best among all California runners this season.
His goal for the rest of this season is simple.
“I want to win state in the two-mile,” he said.
Webb said he will also initially run the 1600 at least as far as the CIF-SS Finals, but is not sure if he would keep running that event at the CIF State Championships, if he qualified. Last year, Webb finished 10th in the state in the 3200 (9:03.98). His time of 8:52.17 would’ve been fast enough to win state last year.