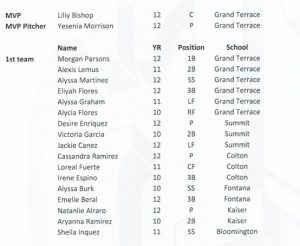 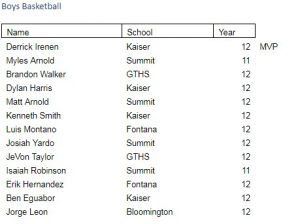 END_OF_DOCUMENT_TOKEN_TO_BE_REPLACED

Last week, Kaiser settled for a 15-15 tie with Downey Warren, but not by its own choice.
Here’s the situation as told to me from Kaiser coach Phil Zelaya:
Warren scored the game’s first touchdown and went for 2 to go up 8-0. Kaiser answered and also went for 2 to tie the score, 8-8.
Then Kaiser scored again, this time kicked the extra point to go up 15-8. Warren answered right back and quickly went down the field to score a touchdown with about 25 seconds left.
“It looked like they were going to go for 2,” Zelaya said.
It was big Warren crowd, a “White Out” night for the fans and coach Raul Lara, the former coach at Long Beach Poly decided to kick the extra point. It was successful and the game finished in the tie although Kaiser nearly had a chance to win in the final seconds.
Some preseason games have overtime, by mutual agreement from coaches, but most do not. Coaches want to play 48 minutes, but don’t see the need to play extra time, risking injury, in a game that likely has no bearing on whether or not they make the playoffs.
So what would Zelaya have done?
“I would’ve gone for 2,” he said.
Yes, a tie is better than a loss. But don’t you want your team to see you’re willing to go for it? I would’ve gone for the win, too.

I found two common opponents between the Huntington Beach Edison and Kaiser boys basketball teams in advance of Friday’s CIF-SS Division 2AA semifinal game at Edison, and the results don’t do a lot to help settle the idea of who should win this game.

Later, Kaiser played both of those teams and had different results
Jan. 8, Kaiser lost at Rancho Cucamonga in a nonleague game, 66-61
Jan. 18, Kaiser defeated Villa Park, 60-54 in an MLK Day game played at Los Osos High

I’m no expert on this matchup, but one thing I know is that Myles Franklin, a junior guard who was Villa Park’s second-leading scorer, had 19 points against Edison, but did not play against Kaiser.

What does this say? That perhaps on any given day, either team can win. And in the semifinals, they both have a chance.

I got a text from Rancho Cucamonga coach Bill Burke, who said Edison “is patient and physical. If they can get to the Kaiser bench, they will win, if not, Kaiser will.”

Kaiser’s bench isn’t terrible, but its strength is in the leadership of the starting 5. Armani Dodson can’t get into early foul trouble. If Edison is physical, it will be interesting to see how the game is called.

Sometimes, I cover a game, and it’s so entertaining a game that there’s more I want to get to than I can possibly mention in a story. Such was the Kaiser/Colony football game on Friday, won by Colony 23-19.

KAISER 48, APPLE VALLEY 42>> If anybody left Malloy Stadium on the Kaiser High School campus early, they missed a furious fourth quarter that saw the host Cats hold on and score a 48-42 win over Apple Valley after building a 21-point margin in the fourth quarter. The Cats (3-1) also had a 48-27 advantage in the fourth before Apple Valley (2-3) got back in the game on the strength of a pair of 33-yard runs by Tristian Mcnatt. One set up a fourth-down score by T.J. Lewis and Mcnatt scored his fourth TD of the night after the Sun Devils recovered an onsides kick.Mcnatt, who finished with 147 yards in nine carries, also caught a two-point conversion pass from Mossy Bell to make it exciting with 2:42 left. But the Cats killed the clock, thanks to a 11-yard carry by Tyler Allgeier for a first down with 131 left. He and Joshua Johnson were the big offensive keys for Kaiser as Johnson scored three times and rushed for 194 on 25 carries on the night late in the third quarter.

END_OF_DOCUMENT_TOKEN_TO_BE_REPLACED

Kaiser’s ears are still ringing from the “wake-up call” it received eight months ago. The Cats’ run a proud football program, something regularly reflected on the scoreboard. Blowout losses are uncommon, even less common in the postseason, where Kaiser strung together a successful five-year run including 11 playoff wins – prior to last season. 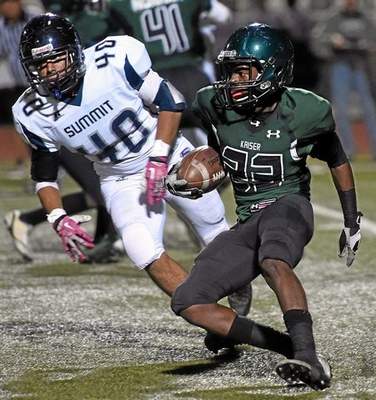 “That first-round loss was bothersome,” Kaiser coach Phil Zelaya said. “The players haven’t forgotten about that. But it says a lot about where we’re at against these new teams. All three teams from our league were out in the first round. That’ll tell you something about the competition.” END_OF_DOCUMENT_TOKEN_TO_BE_REPLACED

Above: Grand Terrace pitcher Maxx Zeman, who pitched a complete game, talks about the game

A longer look of 1 highlight: was this Grand Terrace baserunner safe or out at the plate? Looked safe to me.

The end of an epic league win streak was a little easier for Kaiser players to handle because of the current standings.
The Kaiser baseball team’s 42-game Sunkist League win streak ended on Tuesday with a loss to Colton.
“There’s no way I thought we’d win 42 straight league games,” Kaiser coach Mike Spinuzzi said. “I’m very proud of that. That’s hard to do.”
In some ways, it’s a relief that the streak is over, Spinuzzi said, but the players took the end of the streak hard.
“One thing this team has learned is that we don’t like losing,” Spinuzzi said. “There were players who wouldn’t leave the dugout. I had to tell them to go.”
Despite the loss, Kaiser is still in the driver’s seat to win the league. But that loss Tuesday was coupled with another loss Thursday and the Cats (13-9, 9-2) are now two games up in league with four to play. Two are against Summit (13-8, 6-5) next week and two are against Grand Terrace (13-9, 7-4) the week after.
According to the CIF-SS record book, updated last summer, the 42-game baseball league win streak would rank fifth all-time in the CIF-SS, and 16 behind the record held by Temecula Linfield Christian from 1990-96.

Shown a little in the highlights is the job Kaiser did on the board, especially offensively.