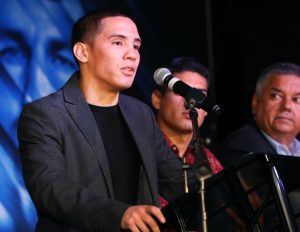 Oscar Valdez is back in ring after short break, looking for first title; Photo by Mikey Williams, Top Rank

The quick turnaround isn’t anything new for Oscar Valdez. He’s had shorter breaks, but if he’s successful Saturday, the sacrifices will be worth it.

Valdez, 25, a two-time Mexican Olympian, has finally arrived at his first title shot when he faces Matias Rueda, from the MGM Grand, Saturday for the WBO featherweight title.

The title was vacated after Vasyl Lomachenko moved to 130 pounds. Lomachenko recently stated this week that he’s staying at 130 pounds.

“I kind of knew after I fought (Evgeny) Gradovich,” Valdez said of possibly having a short turnaround. “Bob Arum went into the ring and asked if I wanted to take a long break or if I wanted to get right back at it because he had a fight for me soon.”

“I was fresh, didn’t have any cuts, I felt like I was in perfect condition,” Valdez said. “I took a couple of days off and went back to gym.”

Valdez said he started training camp at The Rock in Carson with trainer Manny Robles close to weight, allowing him more time to study the style and technique of Rueda.

“I study everybody, either in my weight class or close to it, because I know it is possible we might end up fighting,” Valdez said. “Once I got his name, I went back to find videos. He’s a typical Argentinean, like Lucas Matthysse, Marcos Maidana. He’s a hard-hitter, 26 fights, 23 knockouts. I don’t care about his record and style. One thing my trainer Manny (Robles) is always telling me, don’t worry about what he’s doing, worry about yourself and what you’re doing to prepare.

“This is my shot. This might be my dream come true.”

Valdez competed at the 2008 and 2012 Olympic Games for Mexico and quickly turned professional following the London Games.

His ascent has been quick, but he knows there’s more to learn as his career progresses.

“In boxing, you never stop learning,” Valdez said. “That’s the good thing about this sport. You can never get tired of learning. I love boxing, this is my passion. I don’t take much vacation time because I always want to get back in the gym.

“I feel like I still have a lot to improve on, nobody’s perfect.”