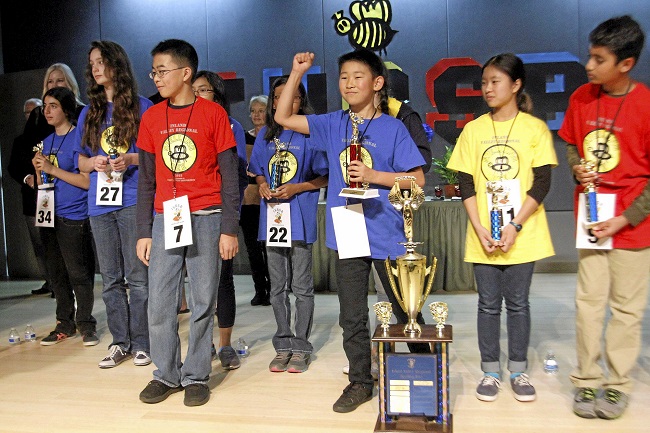 Nicholas Lee, 11, of Caryn Elementary School in the Etiwanda School District clinched victory by spelling the uncommon word, “sinecure,” defined as a job or position in which someone is paid to do little or no work.

“I didn’t think I’d get into the top 10,” Lee said as he posed for photographs next to a massive trophy.

Lee said he studied for about two hours a day over five weeks to prepare for the competition. His strategy: “Sound it out.”

Cheering Lee on from the audience were his parents, Johnny and Gina Lee, and older brother Michael Lee.

Gina said she encouraged her son to enter the spelling bee to build his vocabulary and be better prepared for SATs.

In second place after a neck-and-neck spell-off with Lee was 12-year-old Brandon Lam, a seventh-grade student at Edgewood Middle School in the West Covina Unified School District.

He spelled such words as “longiloquence” and “Einsteinian,” before being stumped on the word “homophony.”

Only the first-place winner will go to Washington, D.C., in May to take part in the nationals. The second-place winner earned $300 and a trophy, and the nine other top spellers received $50 and trophies.

Each student who competed Saturday was the champion of their respective school.