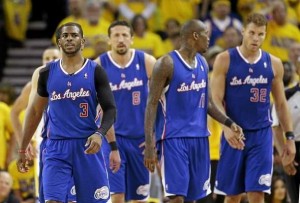 Los Angeles Clippers’ Chris Paul, Hedo Turkoglu (8), Jamal Crawford (11) and Blake Griffin (32) walk back to their bench in the closing minutes of a 118-97 loss to the Golden State Warriors during the second half in Game 4 of an opening-round NBA basketball playoff series on Sunday, April 27, 2014, in Oakland, Calif. (AP Photo/Marcio Jose Sanchez)

After the Clippers’ emotional 105-104 Game 5 collapse to the Oklahoma City Thunder on the road, where Los Angeles squandered a 13-point lead in the final four minutes of play, point-gaurd Chris Paul took the blame.

Paul’s stretch of play in the waning moments would make no highlight reel. Paul turned the ball over with 17.8 seconds left that led to the controversial out-of-bounds call involving Reggie Jackson and the Clippers’ Matt Barnes call with 11.6 seconds left.

After the review kept the ball with the Thunder, Paul fouled Russell Westbrook on the elbow as he attempted a three-point shot with 6.4 ticks left. Westbrook sunk all three for the 105-104 lead.

Paul got a chance for redemption, leading the way for the final shot. But the franchise player lost control the ball in the paint to end the game. After the loss, Paul called it the “toughest thing” that he has gone through basketball-wise.

“Everything that happened there at the end is on me,” said Paul Tuesday night. “It was just bad basketball.”

During Wednesday’s media availability, Rivers came to the defense of Paul saying the whole team played a role in the loss, a collapse over four minute play not 30 seconds.

“This is a team game, it’s not an individual game. We all played a part in the loss last night,” said Rivers. “I hate when he or any single player starts thinking it was on him. It was not. We made mistakes throughout the game, but those are the ones that will be focused on unfortunately for him.”

“Jamal Crawford and I stopped to talk to him on the bus before we got on the plane and he was visibly upset. I told him that game is not on one guy, it’s not on him,” said Blake  “We made plenty of mistake down the stretch. That idea that it’s on him, I understand what he is saying, but it’s not on him by any means.”

The Clippers return home for Game 6 against the Thunder who lead the series 3-2.