DeAndre Jordan had himself a solid game (17 points, 11 rebounds, 4 blocks) in the Clippers’ 124-84 victory over the Phoenix Suns on Monday at Staples Center. He showed an expanded repertoire by dribble-driving for a basket and throwing down about a 6-foot right-handed hook.

But it was his bread-and-butter on this play that brought the Staples Center crowd to its feet. Check it out:

J.J. Redick scored 19 points to lead the Clippers to a 59-42 halftime lead over the Phoenix Suns on Monday night at Staples Center. Redick made 3 of 4 shots from 3-point range, including one with 2.2 seconds left in the half.

The Clippers led 36-17 after one quarter. But with their reserves on the floor to start the second, the Suns scored the first 11 points of the quarter before the Clippers restored order.

Chris Paul contributed 11 points and nine assists for the Clippers (36-19). 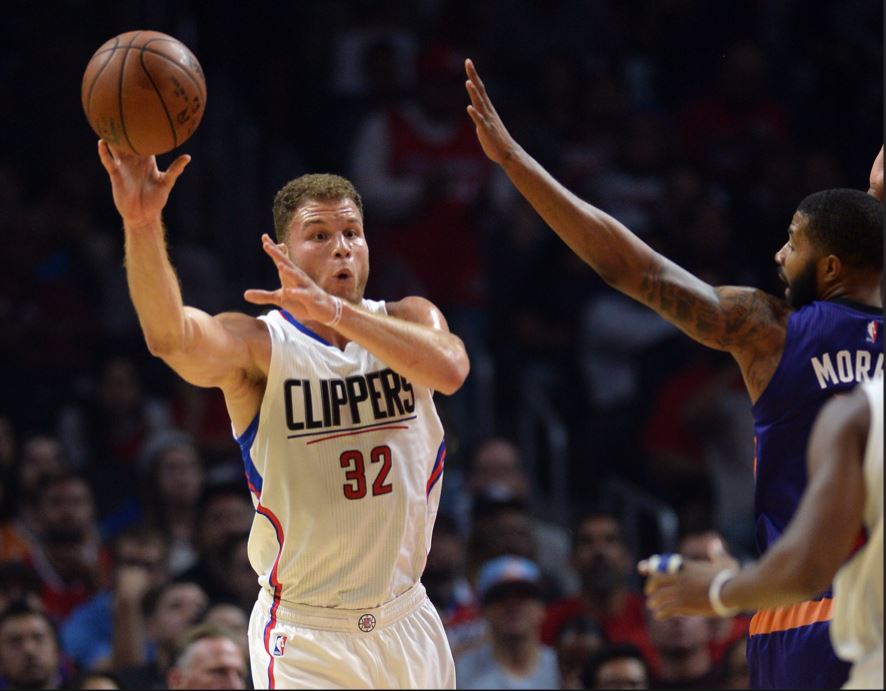 Blake Griffin led the Clippers with 22 points and 10 rebounds in a win over the Suns on Nov. 2. (Photo by Hans Gutknecht // Daily News)

— After scoring just 15 points in the win against the Kings on Oct. 31, the Clippers bench “won the game” against the Suns, according to head coach Doc Rivers. Jamal Crawford led the team’s reserves with 11 points with Wesley Johnson finishing with nine. Paul Pierce, Josh Smith and Austin Rivers each had seven.

— Along with the production from the bench came a good rest for the starting unit. The team had 10 players with at least 14 minutes. It’s still early in the season, yes, but Chris Paul noted the importance of depth for a team with championship aspirations.

“You look at the teams that are most successful in our league, they have that depth,” Paul said. “They sit fourth quarters and stuff like that because the starters start it out and the bench lifts them up. I think our bench was amazing tonight and we need that.”

“It’s good to start out the season like this,” DeAndre Jordan said. “But we have to keep it going and keep improving as the games come.”

— The Clippers go for the 5-0 start Wednesday when they face Golden State on the road. It’s a battle of the last two unbeaten teams in the Western Conference who also happen to have a healthy rivalry between them.

The Warriors pounded the Grizzlies on Monday, winning by 50. A reporter went to ask Jordan about the matchup, starting a question by noting “how well” the Warriors are playing. Before she could finish, Jordan responded, “so are we.”

“They’re the champs,” Rivers said. “They’re a really good basketball team. … That swagger is hard to knock off.”

According to ESPN.com, which cited an “NBA spokesman,” the $25,000 fine Matt Barnes received Tuesday for an incident that took place Sunday at Phoenix was not because he exchanged inappropriate language with Suns owner Robert Sarver.

When the NBA released its statement about the situation, it said Barnes was fined for directing inappropriate language toward a fan during the Clippers’ 120-100 victory. Barnes took to Twitter on Tuesday afternoon and said that was not true, that it was directed at Sarver after Sarver started it.

“As players, we’re obviously held to a higher standard; I’ve had to watch myself on that. But I think if we’re held to high standards, owners should be held to even higher standards,” Barnes told ESPN.com at Thursday’s shootaround ahead of Thursday night’s game at Utah.. “When an elder says something derogatory toward me and I respond, I thought it would stay there. It’s one grown man saying something to another grown man. I’m not going to run and tell, but the fact that he or someone around him told (the league), it’s crazy.”

Barnes did admit he was having words with some fans as well, but still believes his fine was because of his back-and-forth with Sarver.

Forward Matt Barnes on Tuesday was fined $25,000 for what the NBA said was directing inappropriate language at a fan, it was announced by Rod Thorn, president of basketball operations for the NBA.

A news release stated the incident took place with 4:28 left in the second quarter of the Clippers’ 120-100 victory over the Suns at US Airways Center in Phoenix.

However, Barnes took to Twitter to let everyone know it wasn’t a fan he was exchanging pleasantries with:

“Another 25k! The part of the story the nba hasn’t told you was my language wasnt directed at a fan, I was talkn to the owner of the Suns….”

“..Who was sitting on the baseline & I only said something to him AFTER he cussed at me, BUT because I didn’t SNITCH I get fined!!” #thecode

Robert Sarver is the majority owner of the Suns.

Even with just a few minutes left and a lead of 17 points (101-94) over the Phoenix Suns following a 15-0 run Sunday, Clippers coach Doc Rivers intimated he didn’t think his team was out of the woods because of how rapidly Phoenix can get on an offensive roll.

“We talked about it before the game; Phoenix doesn’t go away,” said Rivers, whose team won 120-100 at US Airways Center in Phoenix. “There’s no lead safe when you have Isaiah Thomas and (Eric) Bledsoe and (Goran) Dragic and Gerald Green on the other team. Honest to goodness, with three minutes left, I did not feel safe.

“That’s who they are. They’re capable and you  have to keep your focus when you’re playing them.”