According to a study in the Wall Street Journal, five out of 30 Major League Baseball broadcasters (or broadcasting teams) are unbiased. Vin Scully is one.

By the rules of our study, anyone with a microphone who used a pronoun like “we,” “us” or “our” to describe the home team was given a citation. Obscure pet names for players were also flagged: The Detroit Tigers announcers, for instance, referred to backup catcher Gerald Laird as “G-Money.” Additional penalties were given for things like excessive moping after miscues or unrestrained glee after big moments. (A Miami Marlins broadcaster marked the end of a lengthy scoreless drought by screaming “Hallelujah!”)

It didn’t take long for the study to confirm what many baseball observers have long expected. During the White Sox game–a 2-1 win against the Texas Rangers–Harrelson and Stone (but mostly Harrelson) made a whopping 104 biased statements.

To put that in perspective, the Cleveland Indians duo of Matt Underwood and Rick Manning ranked second with just 23 biased comments and 24 of the 30 teams had fewer than 10. 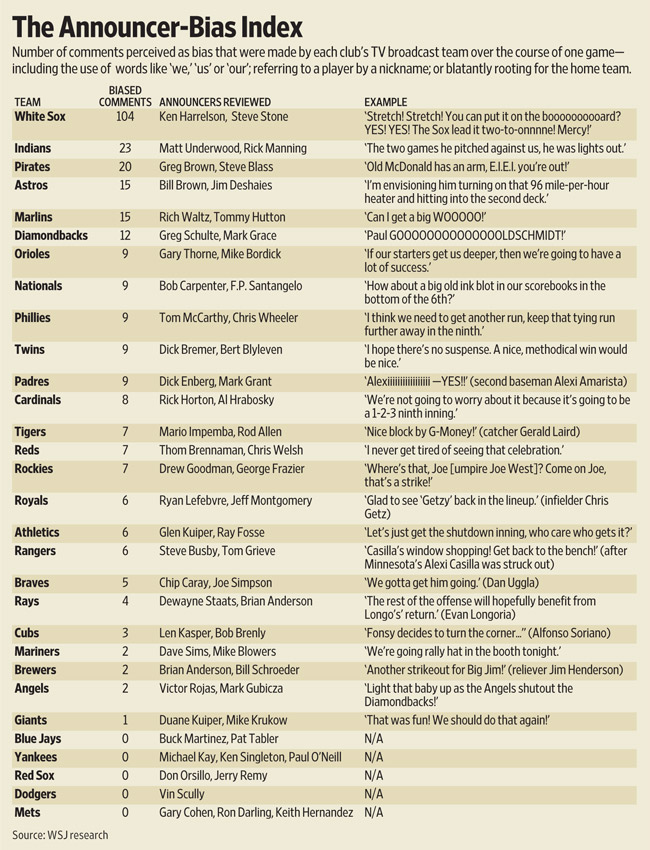