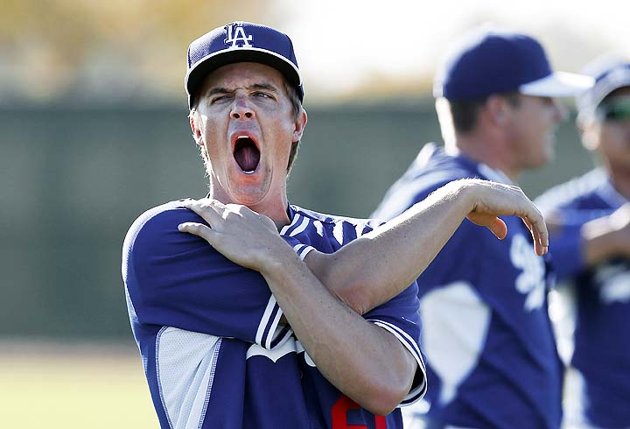 Zack Greinke threw three pitches in his first Cactus League start on Thursday before exiting with a cramp in his right calf muscle. (Associated Press photo)

Dodgers manager Don Mattingly said that Zack Greinke will receive treatment today on his strained right calf muscle and could be throwing a bullpen session as early as tomorrow.

That was a fairly optimistic outlook one day after Greinke couldn’t get through two batters in his first Cactus League start. Greinke could even play catch today, Mattingly said. He was seen walking through the clubhouse without discomfort.

The news was not as upbeat for Ross Stripling, who will undergo a “contrast MRI” on his right elbow after reporting discomfort, Mattingly said. The 24-year-old informed the club that he first felt pain in the elbow “five, six” days ago but didn’t tell the team until after he pitched the final two innings Wednesday against the Arizona Diamondbacks.

“He didn’t tell any trainer, he didn’t tell any coach,” Mattingly said. “It’s one of the things we talk about with young guys. It happens every spring. You ask them to let somebody know and they don’t want to tell anybody because they want to compete and show that they’re going to be whatever. Ross is a great kid but it does go back to that same old thing that happens every spring. Hopefully it’s a situation that puts him a little bit behind schedule. A lot of times we feel that if you’re going to take care of it, it may put you behind schedule for two days instead of a week or 10 days, which really pushes you back.”

There is no news on Matt Kemp, who was scheduled to undergo an MRI today on his surgically repaired left ankle. Kemp actually had the MRI Thursday, but Mattingly said that team Dr. Neal ElAttrache would not be relaying the results until “sometime this weekend.”

Kemp took the field with teammates as usual for stretches but still hasn’t been cleared to run. The team is in no rush to have Kemp on the field for the season-opening series in Sydney, Australia on March 22-23. The 29-year-old outfielder figures to begin the season on the disabled list regardless of the MRI results.