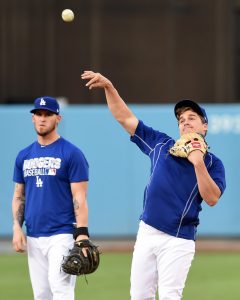 Hernandez’s father received a bone marrow transplant in June, and months of rehabilitation followed. Kiké said that his father shuttled from his home in Puerto Rico to Tampa and back for treatment, all the while watching the Dodgers’ games on TV.

Back in June, the younger Hernandez shaved his head as a show of support for his father’s battle. Father’s Day fell shortly thereafter, and Hernandez hit a memorable pinch hit home run in that day’s game against the Milwaukee Brewers, a 2-1 Dodgers win.

Today’s news was a long time coming, and Hernandez was understandably in a good mood before Game 4 of the National League Championship Series.