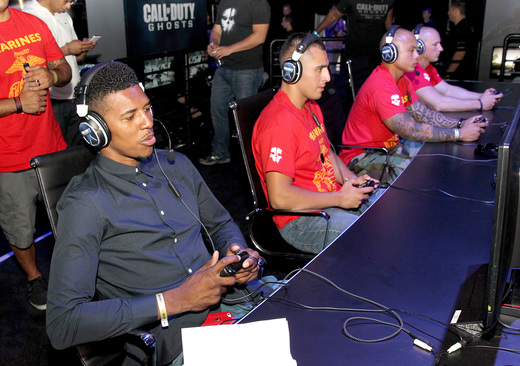 Lakers guard Nick Young considered ESPN ranking the team 12th out of 14 teams in the Western Conference to be “disrespectful.” Young recently participated in a “Call of Duty: Ghosts” promotional event at L.A. Live in downtown Los Angeles. (Photo by Jonathan Leibson/Getty Images for Activision)

There’s a number that continues to bother Nick Young, and it goes beyond finishing in last place against a pair of Marines in Call of Duty: Ghosts this week during a promotional event in L.A. Live.

According to a panel of ESPN writers, the Lakers are favored to finish 12th place out of 14 teams in the Western Conference.

“At first I thought it was 12th in the whole NBA. I thought that was decent,” Young said in a phone interview with this newspaper. “But 12th in the Western Conference out of 14 teams? That’s terrible and that’s disrespectful.”

So where would Young rank the Lakers? He offered a long pause before providing a vague answer.

But with the Western Conference featuring plenty of young and emerging talent in Oklahoma City, the Clippers, Golden State Warriors and Houston Rockets, the Lakers face a daunting task in competing with a veteran-laden roster.

That leaves the Lakers, for once, using diminished expectations as motivation.

“A lot of people don’t believe in us. That’s always good,” Young said. “That’ll add more fuel to the fire. It’ll demand Kobe come back stronger. It should motivate all of us.”

For Young, that’s entailed playing in the Drew League, the Los Angeles-based Pro-Am league that features plenty of home-grown NBA talent. To pick up inspiration, Young has frequently played NBA2K13 as the Lakers to receive a sneak peak on how the dynamic turns out.

The former USC and Cleveland High of Reseda standout has averaged 11.3 points, 1.9 rebounds and one assist in six NBA seasons, including one year with the Clippers. Young’s athleticism and age (28) suddenly makes him a suitable fit for Mike D’Antoni’s system that usually features a fast pace. With uncertainty lingering on when Bryant will return from his left Achille’s injury, Young’s scoring prowess will come in handy in partly filling the scoring void stemmed from Bryant’s absence.

But how will Young and Bryant blend their scoring mentality when they play together?

Meanwhile, Young believes Bryant’s past proclamations that he shows more respect toward players who aren’t afraid of resisting his pleas for the ball if they feel they have a better look.

That mentality didn’t pay off, however, when he played the Marines in Call of Duty: Ghosts. Both Young and Cavaliers lottery pick Anthony Bennett finished last in the event.

“It’s like them trying to come to the court and playing me one-on-one. They were ready,” Young said. The competition was pretty high. We weren’t ready for this. They lit us. They knew how to hide. They were more serious than I was.”

How would the Marines fare against Young in NBA2K13?

“I don’t think they want that,” Young said. “They don’t want that.”

And in Young’s mind, no one wants to go up against the Lakers despite what preseason rankings might say.

Nick Minnerath says Lakers have invited him for training camp

Kobe Bryant may use Lakers’ low expectations as extra motivation