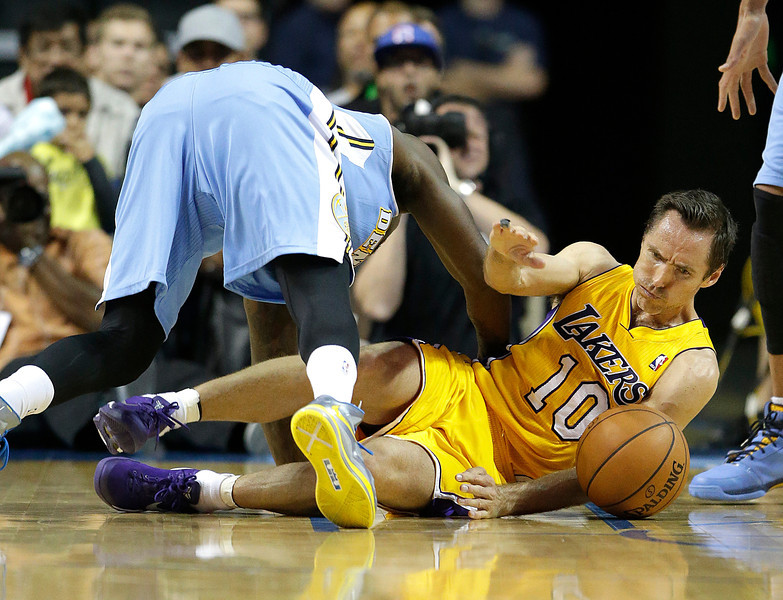 Denver Nuggets’ Randy Foye, top, and Los Angeles Lakers’ Steve Nash fall to the court as they fight for a loose ball in the second half of an NBA preseason basketball game on Tuesday, Oct. 8, 2013, in Ontario, Calif. The Lakers won 90-88. (AP Photo/Jae C. Hong)

ONTARIO – Below are five things to take from the Lakers’ 90-88 win Tuesday over the Denver Nuggets at Citizens Business Bank Arena.

1. Pau Gasol and Chris Kaman showed good chemistry.The Lakers are likely to fill the absence from Dwight Howard as the season progresses. But Gasol and Kaman showed one example on how their on-court chemistry could prove better than Howard and Gasol showed together. Kaman and Gasol have complementary styles, both possessing skill on mid-range jumpers, posting up and playing pick and roll.

The two mixed and matched those talents en route to a combined for 26 points on 11 of 22 shooting and 15 rebounds in about 24 minutes. They also routinely played high-to-low with one another. Such versatility also opened up more minutes to play Jordan Hill at center, a critical development that could ensure the Lakers frontline can receive more rest throughout a taxing season.

2. Robert Sacre iced the game. The Lakers backup center did what Dwight Howard has always struggled to do: make free throws. But there Sacre was making both of his foul shots to give the Lakers a 89-88 lead with 28 seconds left. He then made a defensive stop on the other end that set up Steve Blake’s free throws to widen the gap.

That’s understandable. Nash’s second preseason game marked the first time he’s played competitive basketball for six months. He also centered this offseason more on rehabbing his back and hamstrings than basketball training. But as much as the Lakers want to limit both his practice time and game minutes, it’s critical Nash increases his minutes so that he can further establish a comfort level on the court.

4. Steve Blake has solidified himself as the team’s backup point guard. Who knows if Lakers coach Mike D’Antoni will say this. But Blake’s 16 point performance on 3 of 7 shooting, 8 of 9 clip from the free throw line and three assists shows he deserves he has the backup point guard spot. The reasons go beyond Blake playing last season for D’Antoni and Farmar missing the past two games because of a strained calf. Blake has displayed a complete comfort level in aggressively looking for his shot, making timely passes and scrapping on defense.

Blake has often gone unappreciated his past three seasons with the Lakers because of injuries, tentativeness and an inconsistent shooting stroke. But as he proved last season, Blake thrives in D’Antoni’s system because it makes him more comfortable to create on his own. Should he stay healthy, Blake should do that on a consistent basis this season.

5. Farmar (strained calf) and Lakers forward Wesley Johnson (strained tendon in left foot) sat out Monday, but no one on the team classified the injuries as serious. Lakers coach Mike D’Antoni said it’s possible both Farmar and Johnson will return Thursday when the Lakers play Sacramento in Las Vegas. Meanwhile, D’Antoni’s considering sitting Nash and Gasol on Thursday to help pace them through training camp.