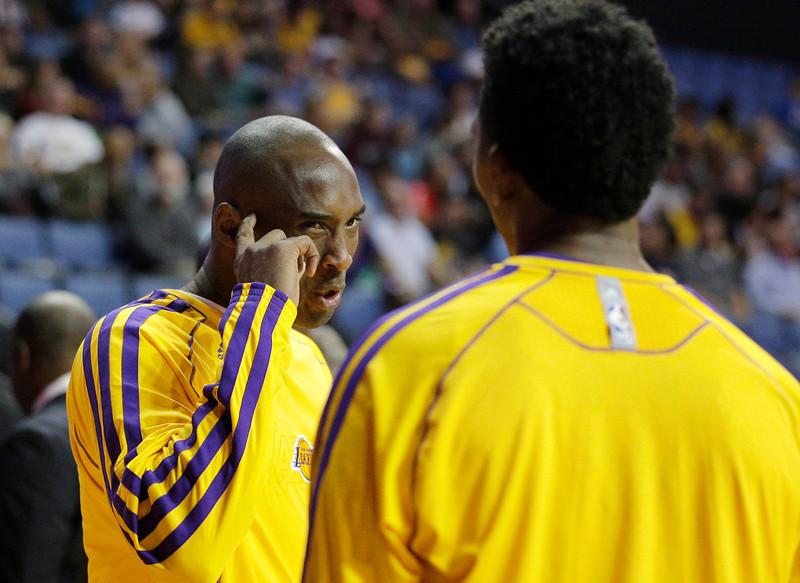 But that’s hardly going to cloud his optimism. He rejoined the team and sat in warmups during the Lakers’ 90-88 preseason win Monday over the Denver Nuggets here at Citizens Business Bank Arena, telling Time Warner Cable SportsNet that he’s “ahead of schedule” surrounding the recovery of his left Achilles tendon and his right knee after having a procedure on it last week in Germany.

Bryant didn’t talk with reporters. Nor did it appear he shared much detail with Lakers coach Mike D’Antoni or his teammates surrounding his Orthokine treatment. That procedure entails Bryant’s blood being drawn, spun in a centrifuge and then reinjected into the knee in hopes to reduce the inflammation. Bryant also had the procedure two years ago both on his right knee and left ankle.

“I haven’t had a chance to run so I don’t know how the knee is gonna hold up, if it’s gonna be sore or what,” Bryant said in the courtside interview. “So instead of taking that chance in the middle of the season trying to disappear to Germany then, I figured I’d do it right now.”

The Lakers haven’t offered any timetable on Bryant’s return beyond their initial assessment when he tore his Achilles tendon in mid-April that he’d stay sidelined for six to nine months. Before Bryant left for Germany, he participated in light jogging and shooting drills. Bryant said the next step involves improving his range of motion and participating in drills that test his explosiveness and muscle endurance. He also added, “I gotta get in shape too because I’ve been sitting on my butt now for a while.”

But it seemed unclear at what pace Bryant would ramp up his activity. Whatever the case, Bryant reiterated that he has no interest in expediting his return, even if it means missing any of the five remaining preseason games or the Lakers’ season opener Oct. 29 against the Clippers at Staples Center.

Kobe Bryant with Lakers for preseason game in Ontario