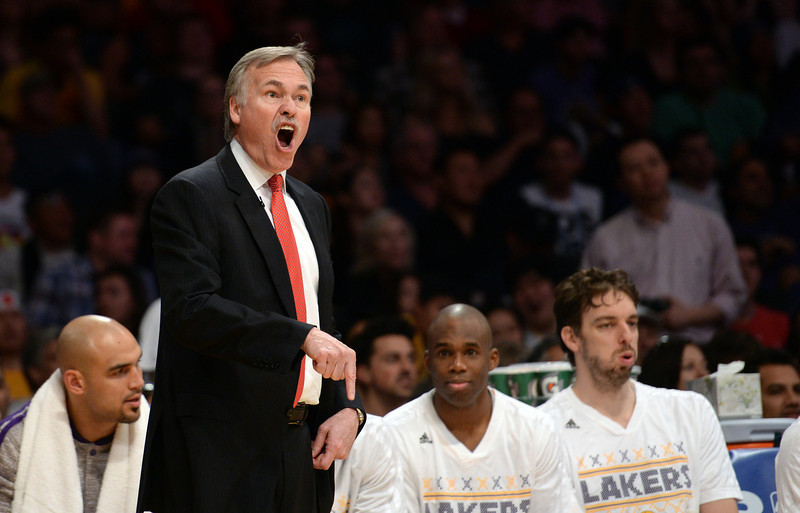 Lakers coach Mike D’Antoni yells an official during their game against the Heat at the Staples Center December 25, 2013. The Heat beat the Lakers 101-95. (Photo by Hans Gutknecht/Los Angeles Daily News)

A two hour plane ride from Salt Lake City to Los Angeles may have softened Nick Young’s frustration over the Lakers’ two-point loss Friday to the Utah Jazz.

But if anything, the flight emboldened his belief that the officials showed him and his teammates disrespect, and played a part in fouling out for the third time in his six-year NBA career.

“I still feel the same,” Young said. “But I can’t do nothing about it. Like I said, I need to keep all my money in my pocket.”

Young’s views may have matched what his teammates have privately shared. But they don’t match the perspective of Lakers coach Mike D’Antoni, perhaps mindful that the Lakers shot more foul shots (16-of-23) than the Jazz (16-of-20).

“I don’t know if that’s quite true,” D’Antoni said. “We should’ve won last night in the sense of we were there and didn’t execute a couple of things down toward the end. It happens. But we have a nice homestand coming up that’s important for us. So I expect us to play well.”

But with the Lakers (13-17) falling to 12th place in the Western Conference, this week marks a significant turning point on whether they can regain ground. Or compete for lottery ping pong balls.

“We have to go out there and play with passion and get into the players on defense and show that grittiness,” Young said. “I think we’ll get it from there.”