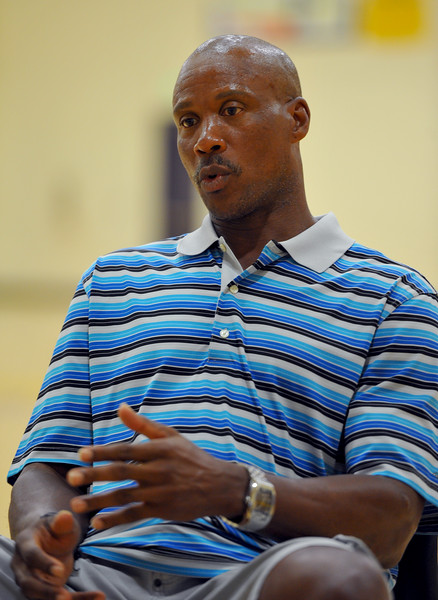 Amid the shrieking whistles, swishing nets and perhaps profanity-laced trashtalk, another sound might emerge that provides the soundtrack to capture the beginning of Lakers’ training camp.

To anticipate that possibility, Lakers coach Byron Scott will place four trash bins on each corner of the court for a simple reason. “I don’t want guys throwing up on my floor,” Scott said. He reported four undisclosed players needed to hunch over during his stints with the New Jersey Nets (2000-2004), New Orleans Hornets (2004-09) and Cleveland Cavaliers (2010-2013), using a series of demanding conditioning and defensive oriented drills to expose immediately any of his players’ weaknesses.

“The first day is going to be tough,” Scott said Tuesday in a wide-ranging interview with this newspaper. “I want to see which guys are ready and prepared, who’s in shape and who’s not. I’ll find out on the first day.”

“That’s how I look at it right now,” Scott said. “But when the ball is thrown up September 30th, if the next guy can beat the guy in front of them, so be it.”

Even at this point, however, Scott said he feels “still kind of torn on who starts at small forward. He reported leaning toward Wesley Johnson because of his athleticism, while relying on Nick Young’s prolific scoring off the bench after averaging last season a career-high 17.9 points per game.

Yet, Scott carries some question marks on Johnson, whose 9.1 points per game averaged featured promising defensive performances mixed in with disappearing acts.

“When I saw Wesley last year, I loved some of the games he played and other games I was wondering where he was,” said Scott, who spent last season as a studio analyst for Time Warner Cable Access SportsNet. “I got to get him to play consistently where he can be at one level all year long. I couldn’t figure it out. Now I’ll be up and close and personal. Hopefully I can find the right buttons to play him at the level that I hope he’s capable of playing.”

Scott hardly has such mixed feelings on Young, whom will likely receive an earful from Scott on his “Swaggy P” imitation and reminders to hustle consistently on defense.

“I love how he could go off and go right at people,” Scott said of Young. “You can run the offense through him if you need to. If you need a shot with 10 seconds on the clock, you can give it to him and let everyone clear out. He’s going to get a shot. He’s a guy who can come off the bench and provide instant offense.”

It appears Young will not be the sole catalyst in jumpstarting the Lakers’ reserves. Scott suggested he may opt for a veteran-laden starting while depending on young players to fill out the rotation so the Lakers have flexibility on how they play basketball. While the starting linup could play at a more methodical rate, the Lakers’ reserves could play at a more up-tempo pace, possibly giving some opponents struggles on adjusting toward the various strategies.

Still, no starting position outside of Bryant’s remains solidified for various reasons.

Scott has reported Nash as fully healthy from a nerve root irritation that affected his back and hamstrings, enough for the 40-year-old guard to work out at the Lakers’ practice facility in one-on-one settings without any reported setbacks. But Scott said he will limit Nash to an undisclosed amount of minutes, and will possibly sit him out on the second night of back-to-backs.

Regardless of whether Nash stays healthy, Jeremy Lin’s role at point guard could prove crucial in providing the Lakers with needed reinforcements.

“I like Jeremy. I like what he brings to the table,” Scott said. “He’s a guard who can flat out shoot the ball and play up and down the floor and is a tough gritty kid. He competes on the defensive end and competes period. I haven’t written him out.”

Scott gushed about Lin’s aggressiveness in the paint, citing an ESPN statistic that said that Lin shot 57.8 percent off drives last season, a mark that only trailed LeBron James (63.8 percent). Yet, Lin has also faced inconsistency with his defense and three-point shooting.

“I think his three point shot, it’s good. It’s just about taking better shots,” Scott said of Lin, who averaged 12.8 points on a 35.8 percent clip from three-point range. If he can do that, he’ll knock those down at a 40 percent rate. As far as the defensive end, I like that he competes on that end of the floor. He’s not a push over. He’s not going to be the best defensive point guard in the league. But he definitely won’t be the worst. He’s one of the guys who will take the challenge every single night and get after you.”

Scott expressed optimism Boozer will bounce back from a poor season in Chicago in which his 13.7 points per game averaged was overshadowed by sitting out in the fourth quarter because of defensive concerns. Scott gushed about forward Ed Davis’ offseason work ethic, believing the five-year veteran will have more opportunity to thrive with the Lakers than in limited playing time with Memphis. Scott praised Randle’s work ethic, but said he is still working on improving his mid-range jumper to complement his powerful presence in the paint.

“That’s the challenge in figuring out how to get him in there and get him to grow as a basketball player and get that experience,” Scott said of Randle. “But he’s going to play against two guys every day in practice who are tough … As much as I Love Julius and where he was picked, he’s still going to have to earn those minutes.”

So will basically everyone else. Hence, why Scott will feature a training camp that features three two-a-day sessions full of conditioning, defensive and scrimmaging drills mixed with instruction on understanding his defensive schemes and offense mixed with pick-and-roll and elements of the Princeton system. Role players, such as Xavier Henry, Ryan Kelly, Jordan Clarkson and Robert Sacre will also have chances to prove their worth.

“We have a lot of guys coming in with a chip on their shoulder,” Scott said. “I love having guys with chips on their shoulder. I really do. They have something to prove. They’re going to be more focused than they probably ever have been.”