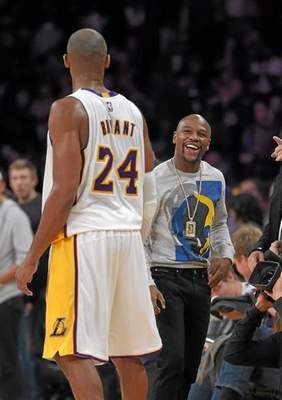 His knees stayed in a bucket of ice. It marked the final chapter of a day’s work for Kobe Bryant as he navigates through an amazing labyrinth that entails fighting back against both Father Time and the Lakers’ persistent struggles.

The Lakers still lost, 116-107, to the Phoenix Suns on Sunday at Staples Center. No one will mistake Bryant’s 10-point effort on 4-of-10 shooting, seven assists and five turnovers as a work of art in what marked his first game since missing the previous three contests to rest his aging 36-year-old body. But on a night where Bryant talked informally with a small group of reporters after post-game interviews about his love for languages, learning and traveling, the Lakers’ star also mused about another trending topic. Bryant sounded equally amused and horrified that a fan drove 35 minutes to Temecula on Christmas Day to defend him against another fan after arguing about the Lakers’ star on Twitter.

“Mamba Army don’t f— around,” Bryant said. “They take after their captain.”

But as Bryant has learned, his retorts to critics about his shot selection and demanding leadership style is not quite as easy as simply counting the number of championship rings on his fingers as recent did to a fan who heckled him a few days ago in Dallas.

“”Sometimes you have to remind people how to count,” Bryant said.

Instead, Bryant tried to address his recent inefficiency and fatigue by both playing conservative with his game and playing time. He only took one field-goal attempt in both the first and fourth quarter, while running a balanced offense that included Nick Young (21 points), Jeremy Lin (19 points), Wesley Johnson (14 points), Ed Davis (11 points) and Ronnie Price (10 points) in double figures. Bryant also played 32 minutes, a slight dropoff from the 35.4 he averaged all season.

“My legs felt a lot better. It’s working myself in the flow of things. But I felt fine. “Just got to be smart about it and keep the minutes down,” Bryant said. “I’m not as sore and three or four minutes makes a big difference.”

Bryant reported “nothing is etched in stone” on how much he will practice or if he will play on all of the Lakers’ nine sets of back-to-back games beginning with next week’s slate against Indiana on Sunday and in Portland on Monday. Lakers coach Byron Scott and Bryant also said his deliberate approach equally reflected Phoenix’s relentless defense on him as it was in hopes of scaling back his scoring both to conserve his energy and ensure more team balance. Bryant also added that “not all minutes are created equal,” suggesting that his efficiency could depend on his workload and opponent than his actual playing time.

Will the transition become as easy as speaking English, Italian and Spanish fluently? Or will it become as difficult as Bryant says it is to learn Mandarin?

But with Bryant averaging 24.1 points on a career-low 37.2 percent shooting, Scott stressed he will handle his star player with more care.

“It’s more of a discipline for me,” Scott said. “There are going to be times I want to put him in early because I know how valuable is he is to our team. But I have to fight that temptation to do that.”

Scott had talked leading up to training camp that he would adopt a conservative approach. But after seeing Bryant appear fresh after playing only six games amid injuries to his left Achilles tendon and left knee, Scott became more convinced Bryant could handle a heavy workload without compromising his health. Scott gave himself wiggle room to play Bryant between 30 to 40 minutes per game. Scott even exceeded that threshold three times, two for overtime games and one for a regular-season game that entailed four days off between contests. Eventually, Scott also assigned Bryant point guard duties over Jeremy Lin and Ronnie Price.

Bryant still manned that responsibility on Sunday despite Lin and Price playing well. But Bryant took on a less-is-more approach with the rest of his game.

“Kobe is one of the smartest players in this league. He starts to listen. When you get to this point and time in your career, you have to listen to your body a little bit more,” Scott said. “He’s being smart. Allowing me to sit him and not put up a fight and trusting in me, I thought was big for us.”

And it’s a dynamic that both the Lakers’ coach and star believes traces back when Scott mentored Bryant his rookie season 18 years ago.

“I trust him implicitly. We talk so much,” Bryant said of Scott. “I can talk to him about anything and I know that it stays between us. I trust his judgement and I trust him enough to open up to him. That makes things very easy.”

That’s why the Lakers are holding out hope that Bryant blends his conservative playing time and new playmaking role with as much ease as he predicted it will become to learn Portuguese.

“He did a great job making basketball plays,” Lin said. “That’s what we’re going to need.”

Will Lakers maintain offensive balance as shown in Phoenix loss?