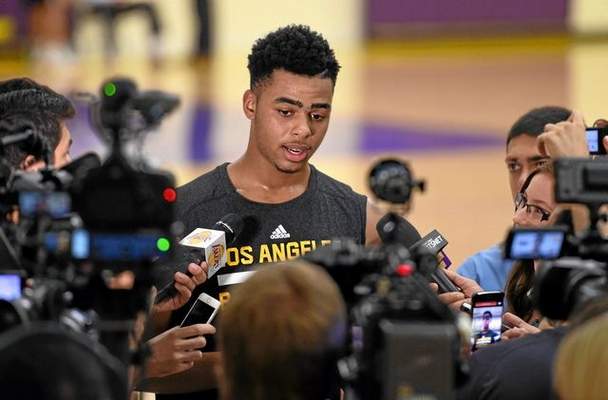 Four days after Russell experience elation over the Lakers selecting him with the No. 2 pick of this year’s draft, Kobe Bryant reached him and then peppered him with a compliment.

“He said he heard great things about me,” said Russell earning Big 10 Freshman of the Year honors for averaging 19.3 points and five assists with Ohio State. But instead of reveling in the Lakers’ star praising him, Russell quickly told Bryant something that suggests the two speak the same language.

“I just told him I’m a sponge,” Russell said on Monday at his introductory press conference at the Lakers’ practice facility in El Segundo. “Whatever he’s willing to teach me, I’m willing to learn.”

Russell then said that entailed “everything,” mindful that Bryant enters his 20th and possibly last NBA season with an extensive resume that includes five NBA championships, a third place on the league’s all-time scoring list and overcoming numerous injuries.

“I always knew he was one of the greatest to play the game,” Russell said of Bryant. “So, just to get this honor to play with him is just remarkable.”

Russell smiled as he said those words, mindful that Bryant’s presence should draw double teams and make it easier for him to navigate through defenses. The Lakers will also feature Jordan Clarkson as a likely backup after earning All-NBA Rookie First Team honors last season, prompting Russell to praise him for his explosiveness and versatility.

But playing with Bryant also can create a maze itself, a dynamic that entails reduced shot opportunities and even ball-handling duties. Yet, Russell maintained he’s a “guy who can play with anybody.”

“I can adjust to whatever situation, if it’s being playing off the ball, on the ball, if it’s me creating for guys and that being my only role, I’m up for the challenge,” Russell said. “I notice guys stick around in this league for having multiple things that they do good, but that one thing that they do great helps them stick to a team.”

The Lakers believe Russell will stick around.

So much that Lakers coach Byron Scott believed Russell could become a superstar. So much that Lakers general manager Mitch Kupchak expressed confidence Russell could end his career with a retired Lakers jersey, an honor Magic Johnson, Jerry West, Gail Goodrich, George Mikan, Wilt Chamberlain, Kareem Abdul-Jabbar, Jamaal Wilkes and Shaquille O’Neal holds. So much that Scott shared the leadership and confidence Russell showed in his second pre-draft workout reminded him of Johnson.

Though Russell considers himself “the best basketball player in this draft,” he downplayed the comparisons to Johnson.

“I’m honest with myself, I’m not the basketball player he is. That’s something I’m working to become. But, for him to say that, I know that he sees the potential,” Russell said. “But, I can’t get too high off that. I’ve always been a guy that was overlooked, just I respect my work ethic and where I came from to get to this point. So, my edge on my shoulder is bigger. I’m still only 19, so there’s a lot for me to learn and a lot for me to experience.”

Thankfully, Russell has a willing and trusting teammate in Bryant to help further his education.

RELATED:
What qualities will No. 2 pick in NBA Draft need to flourish with Kobe?

Larry Nance Jr. on Kobe Bryant: “I can’t thank him enough for forgiving me”