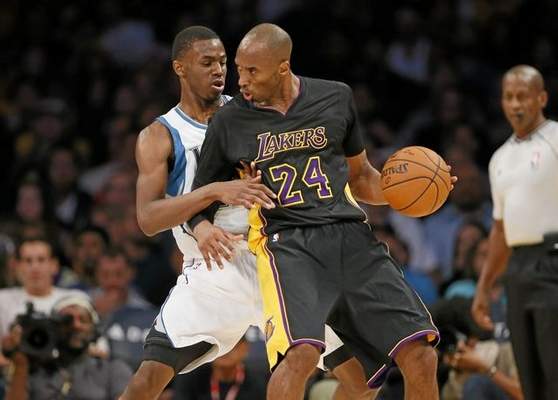 What started out with elation soon turned into dread.

The Lakers drafted Wyoming senior power forward Larry Nance. Jr on Thursday with the 27th pick of the 2015 NBA Draft. But as he processed all that excitement, Nance Jr. estimated it took only two minutes before a tweet he posted three years ago about Kobe Bryant’s sexual assault charge in 2003 went viral. Nance Jr. soon admitted “it was definitely something I wish I could take back.”

“I thought I was about to throw up,” Nance Jr. said on Monday at his introductory press conference at the Lakers’ practice facility in El Segundo. “I felt sick to my stomach. I embarrassed myself and felt so bad about what I said. I wanted to apologize to him right away.”

He tracked Bryant’s phone number. Nance Jr. wrote out a formal apology addressing him as “sir” and “Mr. Bryant.” Nance Jr. delivered the apology to Bryant on Friday. Nance Jr. then recalled Bryant offering a similar response to what he said on Saturday with ESPN’s Jemele Hill at the BET Experience at the Nokia Theater in Los Angeles. Then, Bryant called the incident “water under the bridge.”

“I immediately felt my stomach release,” Nance Jr. said. “It was definitely something I’ll learn from.”

That helped Nance Jr. “sleep like a rock” over the weekend, something that starkly contrasted to his feeling on what Bryant’s reaction would entail.

“Terrified. You hear all the stories about how Kobe, or Mr. Bryant, is so intense and just always on edge,” Nance Jr. said. “I was nervous to send him a long message and then just get an, ‘Okay,’ or not a response at all. I’m just so so glad he handled that in the manner he did. I still could be up here with a stomach in my knot, or a knot in my stomach. But he did a terrific job and I can’t thank him enough for forgiving me.”

Interesting that Nance Jr. referred to the Lakers’ star as Mr. Bryant. He repeatedly addressed his teammate that way both out of respect for the 20-year NBA veteran and out of embarrassment to what he tweeted.

“Gee, I sure hope Kobe can keep his hands to himself in Denver this time.” It also included the hashtag “#rapist.” In 2003, Bryant was accused of sexual assault in Colorado, though charges were eventually dropped.

But Nance Jr. said he will still address Bryant with a formal title.

“I’ve still got to regain my good graces with the Lakers fans,” Nance Jr. said. “I’m working on that before any special treatment comes to me.”