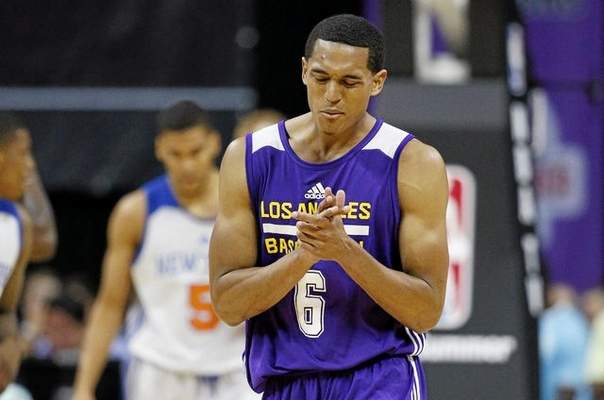 Lakers guard Jordan Clarkson, who is averaging a team-leading 18 points in the summer league, will look to improve on his rookie season. (John Locher/The Associated Press)

The journey Jordan Clarkson experienced as an emerging rookie briefly veered from his basketball development toward business. Excel Sports Management and Clarkson parted ways last month, according to league sources familiar with the situation.

Though Excel Sports Management cut ties with Clarkson, the Lakers rookie guard also felt frustrated with the agency’s communication and conflicting information about marketing opportunities, according to a league source familiar with his thinking. Clarkson had worked with agents Mike George and Jeff Schwartz.

Despite the terminated relationship, Clarkson has to pay Excel Sports an undisclosed percentage of money despite leaving, according to a league familiar with the terms. Clarkson has not yet signed with another agent and is considering different options, said a league source familiar with his thinking.

The Lakers selected Clarkson with the 46th pick in the NBA Draft. But he landed on the NBA’s All-Rookie first team amid an enhanced role on a team debilitated with injuries. Clarkson averaged 15.8 points on 45.8 percent shooting, five assists and 4.2 rebounds in 32.1 minutes through 38 games as a starter.

Clarkson will make $845,059 in the 2015-16 season in what marks the league minimum for a second-year player. But Clarkson could then net a lucrative deal next summer as a restricted free agent.