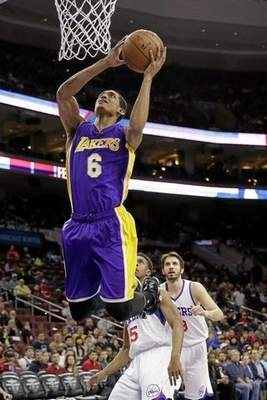 The Lakers’ Jordan Clarkson will not play for the Philppines during this month’s FIBA Asia Championship. Matt Slocum/Associated Press

Jordan Clarkson had wanted to play for the Philippine national team. The team wanted Clarkson to play, too.

But amid concerns that his participation would conflict with his responsibilities to the Lakers, Clarkson will not play during for the Gilas Pilipinas during this month’s FIBA Asia championships, the Philippine Basketball Assn. announced on Tuesday on their website.

The statement added that Philippine national team executives Ricky Vergas and Patrick Gregorio met recently with Lakers general manager Mitch Kupchak and president Jeanie Buss about to “exhaust all possible options” regarding Clarkson’s participation. The Lakers were fine with Clarkson’s participation so long as it did not interfere with the Lakers’ NBA schedule. Clarkson may have become eligible to play up to three early tournament games, but his participation would have been cut short.

The Lakers are scheduled to have their media day on Sept. 28 before flying to Hawaii to begin training camp that includes two exhibition games in Honolulu on Oct. 4 and 6.

“We will ask FIBA Asia to consider holding the tournament in the same manner as FIBA Americas, Europe, Oceania and Africa do, that is avoiding scheduling conflict with the calendar of the NBA,” the team said in a statement.

Clarkson, whose mother is half-Filipino, landed on last year’s NBA all-rookie first team after being selected with the 46th pick of the 2014 NBA Draft.