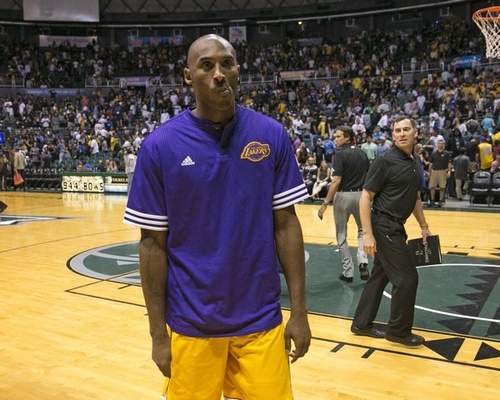 Lakers guard Kobe Bryant practiced on Sunday for the first time since injuring his lower left leg in a preseason game on on Oct. 13. (AP Photo/Marco Garcia)

Just as Kobe Bryant looked to shed off his rustiness from a nearly two-week long injury, a significant development took place in Sunday’s practice that fueled the Lakers’ star into overdrive.

“Somebody decided to talk to Kobe,” Lakers forward Metta World Peace said, laughing. “That was the wrong thing to do.”

Yes, it was. Bryant practiced without any restrictions on Sunday, his first time since nursing a bruise in his lower left leg on Oct. 11 that sidelined him for three exhibition games and six practices. And apparently one of Bryan’s teammates fueled his competitive juices by talking trash to him.

“I’m not going to disclose any names because we’re a very confidential organization,” World Peace said, smiling. “But it wasn’t the right move. It was definitely not smart.”

That’s because Lakers coach Byron Scott reported that Bryant “ran well and shot the ball pretty well.” Scott described his conditioning as “better than I thought it would be after being out for a couple of weeks.” And despite Bryant not running in any drills for the past 11 days, Scott said his star player could make hard cuts without looking uncomfortable.

All of which made Scott sound more determined Bryant will play in the Lakers’ season opener against Minnesota at Staples Center on Wednesday. Bryant will also likely complete all of the Lakers’ practices on Monday and Tuesday.

“If he couldn’t go tomorrow, I would start worrying,” Scott said. “He walked out today and said it felt good and gave me the thumbs up. He went through it with the scrimmage and everything. You could see a little rust. But other than that, he was moving pretty fluid again. It was good to see.”

Practice ended once the Lakers opened the doors to the media. Bryant did not speak to reporters and spent that time receiving treatment. That left World Peace offering up some hyperbole about the Lakers’ closed practice, joking that Bryant even threw a windmill dunk.

“He was on the fastbreak,” said World Peace, one of Bryant’s teammates in the scrimmage. “I was like, ‘Wow, Kobe’s back.”

World Peace turned serious moments later about Bryant’s return after averaging 22.3 points on a career-low 37.3 percent shooting through only 35 games last season before suffering a season-ending injury to his right shoulder. He declined to predict how many points Bryant will average in the 2015-16 campaign out of fear of “taking away from the team.” But World Peace maintained Bryant is “going to play well.”

“You have to double him. You’re not going to be able to guard him one-on-one,” World Peace said of Bryant. “We’ll see who succeeds with that. He’s hungry. He’s excited. He looks great. He’s still playing basketball. He’s still enjoying the game. That’s whats most important. He comes out here and enjoys and plays basketball. He’s doing the right thing, taking care of his body and enjoying talking trash and playing basketball.”

Jordan Clarkson believes he will play in Lakers’ opener