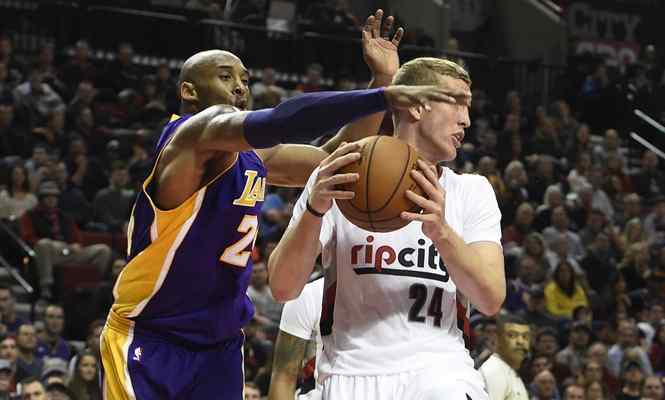 PORTLAND — After spending the past two months basking in endless praise, thoughtful gifts and nostalgic video tributes, Kobe Bryant experienced something that seemed more natural during his accomplished and drama-filled NBA career.

Bryant became the villain again during the Lakers’ 121-103 loss to the Portland Trail Blazers on Saturday at Moda Center. The examples went beyond the hometown crowd booing him every time he touched the ball. With the Lakers offering little to stop Portland’s Damian Lillard (36 points) and CJ McCollum (28 points), Bryant provided pointed comments to his teammates about their play in the locker room afterwards, according to multiple sources familiar with the situation.

Bryant, who posted 10 points on 5-of-9 shooting and five turnovers in 25 minutes through three quarters, became upset both with the Lakers (9-37) for losing their sixth consecutive game and for some on the team smiling after the loss, sources said. Bryant took particular aim at Lakers rookie point guard D’Angelo Russell and second-year forward Julius Randle and even called them out by name, sources said.

“You know I don’t do the gossip [expletive],” Bryant said in a friendly exchange when asked about the incident.

None of Bryant’s teammmates, including Russell and Randle, were specifically asked about Bryant’s criticisms because Los Angeles News Group learned the revelations after media access to the locker room ended. But multiple sources confirmed that Bryant spoke for about two minutes after Lakers coach Byron Scott addressed the team.

Bryant also expressed his displeasure during a timeout when the Lakers trailed, 93-74, with 1:57 left in the third quarter. That happened after Randle missed two consecutive rebounds before Lillard hit a 3-pointer. The Lakers looked deflated after the play.

“We just weren’t defending,” Randle said about Bryant’s criticisms during the timeout.

Scott elaborated more, saying his players did not follow his game plan in trying to keep the ball away from Lillard and McCollom by double teaming them.

“Our guards didn’t do a great job of getting through the screen,” Scott said. “Our bigs did a horrible job of being up and ready to trap them.”

But Scott expressed hope that message would become better ingrained with Bryant echoing his critiques.

“He was telling guys to get up, pressure the guys and get the ball out of their hands. The things we talked about pregame and things we talked about at halftime,” Scott said. “I think it helps because of the fact [Kobe] is who he is. At times, they’ll get tired of hearing it from coaches all the time saying the same thing. When one of your peers says it, especially someone of that magnitude, you would hope those guys would listen. You would hope they listen to that and take it to heart.”

The Lakers still boasted a balanced offense featuring Russell (21 points), Lou Williams (16), Randle (11 points, nine rebounds) and Jordan Clarkson (10). But Russell considered his offensive contributions “irrelevant” since he scored nine of those points in the fourth quarter when the game was out of reach. Scott only called Russell’s play” okay” before sitting him for the final 7:27 with the game out of reach.

Clarkson appeared annoyed and sounded frustrated with the team’s defense.

“This whole game we were supposed to be trapping the ball. We didn’t trap. We just got to listen. Everyone,” Clarkson said. “We have to do [talk] first. We haven’t done that yet.” 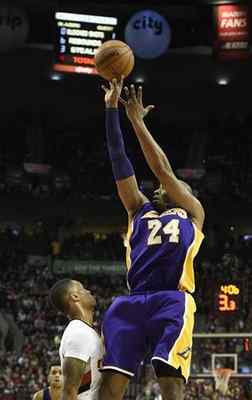 Before Bryant expressed his dissatisfaction to his teammates, the Blazers fans did not sound welcoming either.

Once he heard his name announced in the starting lineup, Bryant mostly heard boos. Any time he touched the ball, Bryant heard the same thing. Instead of the Blazers offering a video tribute of Bryant’s greatness, Portland showed a highlight reel of its two previous victories against the Lakers this season by an average of 13 points.

Cheers only erupted during two instances.

Legions of Bryant supporters pleaded for Bryant to play in the final minutes.

“I was just trying to get loose at that point just in case Coach wanted to put me in,” Bryant said. “I would’ve completely understood it and went in the game willingly. To get that kind of reaction means a lot.”

It also meant a lot for Bryant to hear both the boos during the game and the cheers during a standing ovation once the game ended. The cheers lasted as Bryant hugged Lillard and Portland forward Ed Davis before heading toward the entrance tunnel. Bryant waved to the crowd and said, ‘Thank you.’

“That’s what it’s been my entire career,” Bryant said. “Why would I want it to be any different? Why would the fans want it to be any different? That’s the way it’s been. You want to go out. The big difference is at the end of the game with the chants and mutual respect. You can show it now because you know there’s no coming back. That’s the difference. The boos every time I touch it, I absolutely love it.”

Although several fans chanted “Kobe, Kobe” at times throughout the game, some Blazers fans jeered his presence. One fan even held a sign that said, “Kobe, we will miss beating you!” Bryant heard something even more amusing.

Bryant offered little retort on the court, though Scott praised his star player for adopting a less-is-more approach.

“He didn’t look to be aggressive,” Scott said. “He looked to try to get the ball moving. He had one of those nights where he did all the right things.”

Still, Bryant ended his 20-year NBA career with a 6-26 record in Portland. Yet, that did not stop Bryant from averaging 27.6 points against the Blazers, his highest career total against a single team. That included Bryant posting 47 points on 14 of 27 shooting, eight rebounds, five assists and four blocks on April 10, 2013 to help the underachieving and injury-laden Lakers secure a playoff spot. During that stretch, Bryant had averaged 28 points in 45.6 minutes per game in the last six contests before tearing his left Achilles tendon on April 12, 2013 against Golden State.

“It felt like I had to control every inch of the game offensively and defensively during that stretch,” Bryant said. “I dominated the ball and made plays for others and put guys in the right position so I could quarterback the defense. I was at home studying film three hours a day aside from icing, stretching and lifting and all those things. It was a crazy stretch.”

“That’s something that always stuck with me,” Bryant said. “In Game 7, there were a couple of plays that turned the tide. It’s a game of emotion. It doesn’t matter what the score is. There’s a flip in the momentum of the game and all of a sudden, things becomes harder. Team plays become harder. We were able to flip that switch. Once that happened, it became very difficult for them to overcome it. It doesn’t matter how much talent they have.”

And that also explained Bryant’s heated talk with his teammates afterwards. Though the Lakers field an unproven and inexperienced roster, Bryant expected more out of this group with both results, effort and attitude.