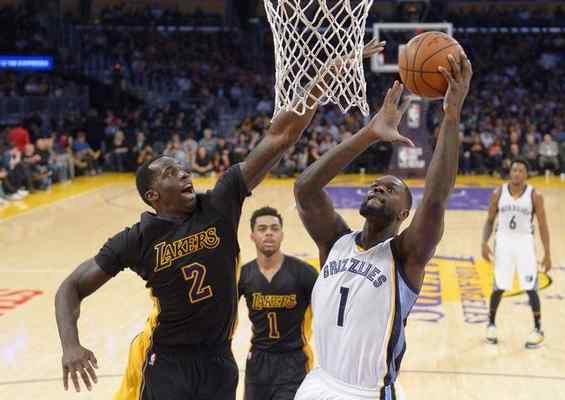 The sequences seemed so monotonous as the Lakers hosted an open layup line and 3-point shooting contest anytime the Memphis Grizzlies wanted. The anxiety reached fever pitch with scattered boos, an audible expletive a fan yelled near press row and an exasperated Mitch Kupchak overseeing the wreckage.

All of which looked awfully familiar as the Lakers suffered a 122-95 loss to the Memphis Grizzlies on Friday at Staples Center. The Lakers (11-49) lost their eighth straight game and became two defeats away from setting the franchise record once again for consecutive losses (10), something they already set in the 1993-94 season and tied in January.

But there marked two distinguishable differences.

The first change became apparent before the game even started. Kobe Bryant sat out for the first time in 11 games because of increased soreness in his right shoulder, creating what Lakers coach Byron Scott described as “a lack of leadership.”

“Everybody is holding their head down when things aren’t going right,” Scott said. “Most of it is when we’re missing shots.When we miss shots we let that affect us on the other end.”

The second change came to light in the locker room. Scott installed a new offensive scheme during Thursday’s practice, a tactic that became surprising for two reasons. The Lakers had exactly one day to master new concepts. The changes happened with 22 games remaining.

“Coach was demanding we run it. It was tough,” Lakers rookie point guard D’Angelo Russell said. “We didn’t run it against a defense. We talked about it and then played with it. I feel like it’s a great offense, but it was thrown at us late.”

That may have contributed toward Jordan Clarkson posting eight points on 4-of-16 shooting, marking his first single-digit performance in the past 27 games. But Russell still thrived, posting 22 points on 6-of-9 shooting, 8-of-12 from the foul line and three assists in 29 minutes before sitting out the entire fourth quarter with a towel draped over his head. That sparked Scott to gush about Russell, saying, “I love where he is right now and I love what I’m seeing.” Scott then praised Russell for focusing more on his mid-range game and attacking the basket instead of shooting 3-pointers (2-of-2).

“It’s been about opportunity. I feel like if I mess up, I have more freedom and a longer leash to mess up,” Russell said. “Earlier in the year, it was like, no leash. Just trying to take advantage of it.”

“It’s cool,” Russell said. “I know I’m going to be out there on the floor no matter what. It’s up to me to take advantage of it.”

Yet, the Lakers still not take advantage of anything defensively. That led the Lakers both to bring up their inexperience, need to communicate and focus on their individual assignment. It also sparked Scott to have a practice on Saturday, a surprising development considering the Lakers do not play again until Tuesday against Brooklyn at Staples Center.

But while Scott made no mention about his altered offense, the Lakers’ coach griped plenty about his leadership vacuum.

“It’s a bunch of young guys and it’s understandable. But somebody has to take control,” Scott said. “When he’s not playing, you should be chomping at the bits. You know he’s going to get time. This is an opportunity. You should be salivating.”

Scott cited veteran Lou Williams as a candidate. Russell brought up Roy Hibbert’s presence. But who among the Lakers’ young players could fill a leadership role?

Scott would not say.

Naturally, the candidate presumed to be Russell since the Lakers drafted him second overall last summer out of Ohio State.

“I don’t have the credibility or experience,” Russell said. “So I can’t since what I say goes in one ear and out the other. I feel like once I get that credibility, I feel like I’ll have that quality of being a leader.”

Those on the Lakers’ staff have also privately grumbled about Russell’s attitude and goofiness during workouts. But Russell has also become active with post-practice and shootaround routines. He also has shown a stronger command of the offense.

“Just being able to talk to guys,” Russell said, “and get them going when they’re not ready for the game and stuff like that.”

Russell argued he did not feel as ready beforehand and “was not playing the type of basketball I was capable of playing” for various reasons. He sensed he “was coming out for every mistake.” He conceded the debilitating losses prompted him to “pick up bad habits.”

Some bad habits continued with the Lakers’ defense. Scott believed some emerged without Bryant’s presence, even if the Lakers have struggled with and without him. And some may have emerged with an offense barely 24 hours old.

But Russell tried to embrace it all, even in a season that has given him little reason to feel happy.

“These games, we can prepare for next year and go forward and pick up second nature habits,” Russell said. “You can look at the positives from it.”