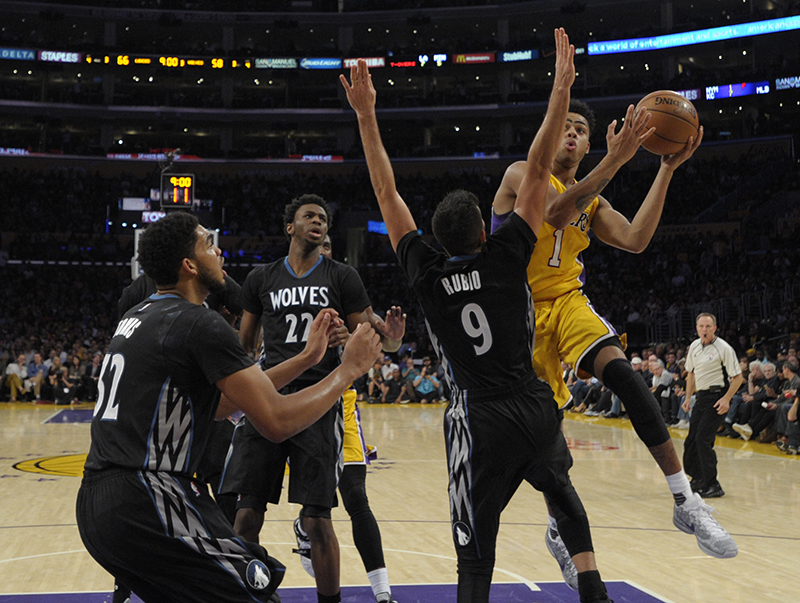 The sample size filled with stronger production and increased minutes in a starting role made Lakers rookie point guard D’Angelo Russell credit something that he believes went beyond his control.

“I have more freedom and a longer leash to mess up,” Russell said. “Earlier in the year, it was like, no leash.”

Yet, Lakers coach Byron Scott argued on Sunday that Russell’s improved numbers and increased playing time only happened because he played better.

“I don’t think I loosened it up. He’s just getting more comfortable in his role,” Scott said. “I don’t feel it was that tight in the first place.”

Russell started for the first 20 games only to lose his starting spot amid Scott’s frustration with poor starts and bottom-line results. Russell also frequently did not close out fourth quarter stretches. But Scott argued Russell received his starting spot back as he sensed improvement with his playmaking, consistency and his work ethic. Though Scott and others on the coaching staff have griped about Russell’s playfulness and tendency to take goofy shots at the end of workouts, the Lakers have liked Russell’s progression with his shooting, playcalling and mid-range game.

“He’s getting more comfortable and his confidence is growing with some of the things we’re doing,” Scott said. “His practice habits have gotten so much better. He’s practiced harder. He’s starting to feel comfortable and confident to come out here and play. But he still has a ways to go.”

Hence, Scott sounded skeptical on if Russell currently has what it takes to be the Lakers’ leader.

“He could, but that’s not something you can appoint,” Scott said. “Leadership is not appointed. It is anointed. Guys are going to follow guys they believe in and they know are right about the right stuff. I can’t sit here and say he’s going to be our leader. That’s going to be worked out in the near future with the teammates he has with him.”

Scott brought up this issue up following the Lakers’ loss on Friday to Memphis, arguing that Kobe Bryant’s absence with a sore right shoulder created a leadership vaccum that no one filled. Though he has praised veterans such as Lou Williams and Roy Hibbert, Scott wondered if any of his young players could carry that mantle.

Russell argued he has leadership qualities, but argued he currently lacks credibility after the Lakers drafted him as the No. 2 overall pick.

“He’s being a little reluctant,” Scott said of Russell. “I think that the guys respect him. But they’re still sitting there and saying you have to show me this is something you want to do.”

But Scott said that Chris Paul earned immediate respect as rookie when he coached him in New Orleans (2005-06) by showing something Scott believes Russell has not fully mastered.

“His work ethic has to be that guys are seeing he’s willing to bust his butt every single day to get better,” Scott said. “Is he a Kobe Bryant type worker? I don’t think we have that kind of worker. But he is a guy that works.”

Lakers’ experience change in leadership, offense in loss to Grizzlies