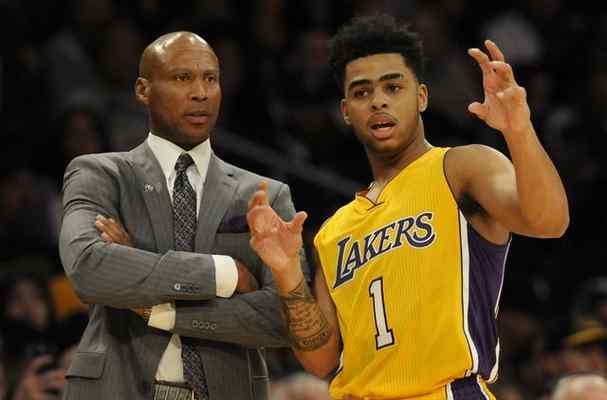 At a very methodical pace, Lakers rookie point guard D’Angelo Russell moved around the practice court on Wednesday and took shots in what marked an extended post-shootaround workout.

Russell moved at a quicker speed when he walked past reporters without missing a step. A large media contingent arrived at the Lakers’ practice facility at El Segundo hoping to ask Russell to address a secretly taped and since publicized video that entailed teammate Nick Young sharing he had a relationship with a woman other than his fiance, Iggy Azalea.

“Nothing to talk about,” Russell said as he went toward the Lakers’ trainer’s room. Later, Russell exited the Lakers’ practice facility with three security guards escorting him to his car as he walked to the parking lot.

The Lakers said that Russell and Young will address the media before Wednesday’s game against the Miami Heat at Staples Center. Russell and Young have had private discussions regarding the incident, according to team sources familiar with the situation. That dialogue will likely continue, but skepticism persists on whether their friendship can be salvaged.

Young has missed the past 10 games, including the last two for what the Lakers attributed to a stomach bug. But Lakers coach Byron Scott said Young will be available to play on Wednesday against Miami.

Scott called the situation an “internal manner” and declined to address specifics.

Russell had shot a video of Young believed as part of a prank on a private Snapchat account, according to a source familiar with the situation. Unbeknown to Russell, celebrity gossip site website Fameolous somehow obtained the video and posted it last week.

The video showed Russell filming Young in a hotel room while asking him questions about women. Russell asked Young, “You was 30 and she was 19?” referring to Young’s age and the age of an unnamed woman Young said he met at a nightclub last summer.

Russell also asked Young if he has ever seen celebrity, Amber Rose.

Since then, certain teammates have distanced themselves from Russell and have become distrustful of him after violating an unwritten rule about making details about anyone’s private life public even if it was unintentional.

Even before Russell’s recorded video became public, several Lakers sources have privately echoed Scott’s criticisms throughout the 2015-16 season about the 20-year-old Russell’s maturity, work ethic and attitude. During an angry speech following a loss in Portland in late January, Kobe Bryant had also singled Russell and Julius Randle out about their poor play. Still, the Lakers do not plan to discipline Russell.

Russell had at least one supporter about his recently released video.

hmmm i see D Angelo Russell is trending… I actually liked his film. Thanks bro.

Scott sounded testy at times surrounding the inquiries about the incident.

“It’s an internal problem and we’ll handle it in house,” Scott said. “If you want to ask me about the Miami game we’re playing tonight, you can ask me. If not, this interview is basically over.”

Scott revealed that Kobe Bryant will play after nursing season-long soreness in his right shoulder. Scott then dismissed whether the incident between Russell and Young contributed to the Lakers losing by 48 points on Monday in Utah, which tied a record in franchise history for the largest margin of defeat.

Though he did not discuss specifics, Scott held out hope the Lakers could put both the losing and incident behind them.

“Our guys understand we didn’t play well the last game,” Scott said. “The good thing about the NBA is the next day you can forget about it and get back on the court. Obviously we’re a little upset with the way we played tonight.”

Bonsignore: Kobe, you are D’Angelo Russell’s only hope