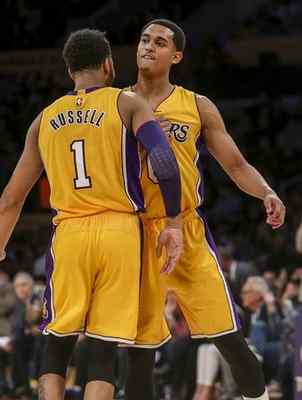 The deflated feeling wore on D’Angelo Russell’s face. This time the frustration had little to do with another Lakers loss or his fluctuating role.

It had everything to do with the remorse Russel said he felt over a secretly recorded video recently going public that showed teammate Nick Young admitting seeing another woman other than his fiance, Iggy Azalea.

“I feel sick as possible,” Russell said before the Lakers hosted the Miami Heat on Wednesday at Staples Center. “I wish I could make things better right away. But I can’t.”

Russell had shot a video of Young on a private Snapchat account, according to a source familiar with the situation. Unbeknown to Russell, celebrity gossip site website Fameolous somehow obtained the video and posted it last week.

“I have no clue how it got out,” Russell said. “If I did, I would definitely tell you guys. But I have no clue.”

The video showed Russell filming Young in a hotel room while asking him questions about women. Russell asked Young, “You was 30 and she was 19?” referring to Young’s age and the age of an unnamed woman Young said he met at a nightclub last summer.

Russell also asked Young if he has ever seen celebrity, Amber Rose.

“He’s one of the guys I’ve always talked to about anything,” Russell said. “I cherish our friendship. For me to have an incident like this come up and put it in jeopardy is not what I intended to do.”

So why did Russell even record the video?

“We joked around and play all around all the time and said crazy things. This just got in the wrong hands. It wasn’t a prank or something for everybody else to see. This was for my eyes and his eyes only,” Russell said. “There’s really no explanation for the topic of that discussion. But we play around and we joke and we laugh. We say things that you don’t really repeat. That was just an incident of playing too much goes wrong. I take the full blame for that and recording the video. But leaking the video wasn’t me.”

Conflicting accounts have emerged on how much Russell and Young have addressed the incident.

Russell and Young had private discussions regarding the incident, various team sources familiar with the situation said earlier on Wednesday afternoon.

“I’ve reached out to him and talked a little bit,” Russell said. “I let him know my apologies. I don’t know if they were accepted. If not, I wouldn’t blame him.”

But a source close with Young remained adamant on Wednesday evening that Russell has not apologized to Young. Even if Russell did, skepticism lingers that Young would have even accepted the apology. Young spoke for about a minute to reporters, but he did not take any questions.

“I don’t want to get into my personal life right now,” said Young, who is on the active roster after the Lakers said he missed the past two games because of a stomach bug. “I think it’s best me and D’Angelo handle the situation we have in a private manner outside of the media. I think it’s something we do need to sit down and talk about. That’s about it. What happened is what happened. We have to work on it.”

Certain teammates have distanced themselves from Russell and have become distrustful of him after violating an unwritten rule about making details about anyone’s private life public even if it was unintentional, according to sources familiar with the situation.

“There’s been a bad vibe,” Russell said. “We’re human so everybody has two cents to say. We got to clear the air.”

Even before Russell’s recorded video became public, several Lakers sources have privately echoed Scott’s criticisms throughout the 2015-16 season about the 20-year-old Russell’s maturity, work ethic and attitude. During an angry speech following a loss in Portland in late January, Kobe Bryant had also singled Russell and Julius Randle out about their poor play. Still, the Lakers do not plan to discipline Russell.

“If I’ve lost anybody’s trust, I’m going to work my tail off to gain it back,” Russell said. “That’s something you need for a winning team. You need everybody to trust each other. You need the first guy to trust the 15th guy. That’s my intentions.”

D’Angelo Russell, Nick Young have talked privately, but friendship still up in air