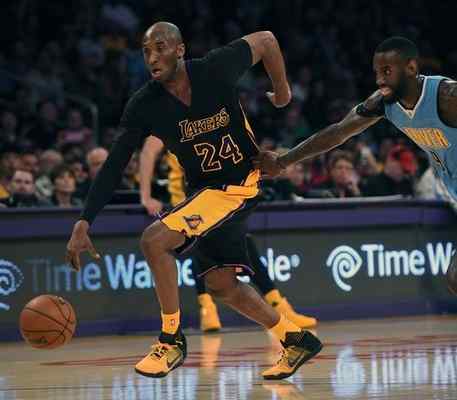 The Lakers’ Kobe Bryant #24 moves the ball up court as the Nuggets’ JaKarr Sampson #9 defends during their NBA game at the Staples Center in Los Angeles, Friday, March 25, 2016. (Photo by Hans Gutknecht/Los Angeles Daily News)

The moment will attract a passionate crowd and media contingent usually reserved for Lakers playoff games. Every play could become emotional. Every second that passes will only spark reminders of the finality of it all.

Yet, Kobe Bryant insisted he will not step on the floor for his final game against the Utah Jazz on April 13 at Staples Center seeing his basketball life flash before his very eyes.

“I’ll embrace it and take it just like I’ve taken every single game I’ve played in,” Bryant said on Tuesday at an American Express event moderated by NBA Inside Stuff host Kristen Ledlow at the Conga Room in L.A. Live. “That’s the real beauty, not try to make it more than what it is because it’s the last game. It’s appreciating the last game and approaching it and playing it just like I’ve played all the other ones. As I sit here now, that’s how I’ll be emotionally.”

When Bryant sits on the bench before starting lineup introductions, will he feel the same way?

It seems hard to say. Bryant repeated he has kept “waiting for that moment where it hits me.” Despite waxing nostalgia and sharing emotional exchanges with opponents during his last games at opposing arenas, Bryant insisted it has not fully registered with him the end of his 20-year NBA career has inched closer and closer.

“I’ve been fortunate to play for 20 years. I left nothing on the table,” said Bryant, mindful he has won five NBA championships and climbed to third place on the league’s all-time scoring list. “I did absolutely everything I could and I’m comfortable with that. It’s not a sad day. It’s not a ‘I wish I could do more day.’ I’m thankful. It’s great. It’s fantastic.”

The reason for Bryant’s stated mindset seems simple. Bryant admitted, “If I thought about it, it would trip me up.” Still, one only has to trace back to Bryant’s last championship run to see how his public demeanor contradicted his private feelings.

Bryant insisted the stakes regarding the Lakers’ NBA title matchup with the Boston Celtics in 2010 did not yield any more significance than any other Finals series, despite the heated rivalry and the Finals loss in 2008. Following the Lakers’ Game 7 win, Bryant admitted the magnitude partly explained his 24-point performance on only 6-of-24 shooting that compensated for with 15 rebounds.

Nonetheless, Bryant sounded at ease as he talked about another game that will become a significant part of his career.

“It’s hard to say I’m really going to embrace the moment because that moment is going to be gone and you’re not going to have any recollection of it other than how you felt in that moment in time,” Bryant said. “But I stay in the moment and try not to make more out of it. I approach it like just any other game. That’s the real beauty in it. It’s not the fact this is the last game. It’s like I have one more to approach it just like all the others. That’s what I’m going to miss, approaching the games that way.”

It sure would add to the nostalgia if Bryant’s last game featured a breakout performance. Or at least some throwback moments during specific plays. Surely, nostalgia will emerge during video tributes, standing ovations, cheers and hugs with opponents, teammates and coaches.

But once it ends, Bryant hopes his lasting memory will have nothing to do with those moments or even his championships.

“If there’s something I can leave for this next generation, it’s to have this constant curiosity about the game,” Bryant said. “You have to continue to ask questions and try to understand why things happen. That’s the most important thing. That’s what I always try to do is ask questions, why does this work or why doesn’t it. Why does this not work.”

Despite preached that to younger teammates and opponents, the 37-year-old Bryant would have a different message for his 17-year-old former self.

“No matter what I’d say,” Bryant said, “I wouldn’t listen to me anyway.”

“Becoming more empathetic with my teammates,” Bryant said. “I was very methodical and very surgical about the game. ‘You have a job to do. Why aren’t you doing it?’ I didn’t understand and didn’t take into consideration that guys have lives outside of the game. There are things that they may be going through emotionally that impacts their performance.”

Instead, Bryant credited another factor impacting his performance. That included a passionate Lakers fanbase that saw Bryant blossom and evolve through 20 years.