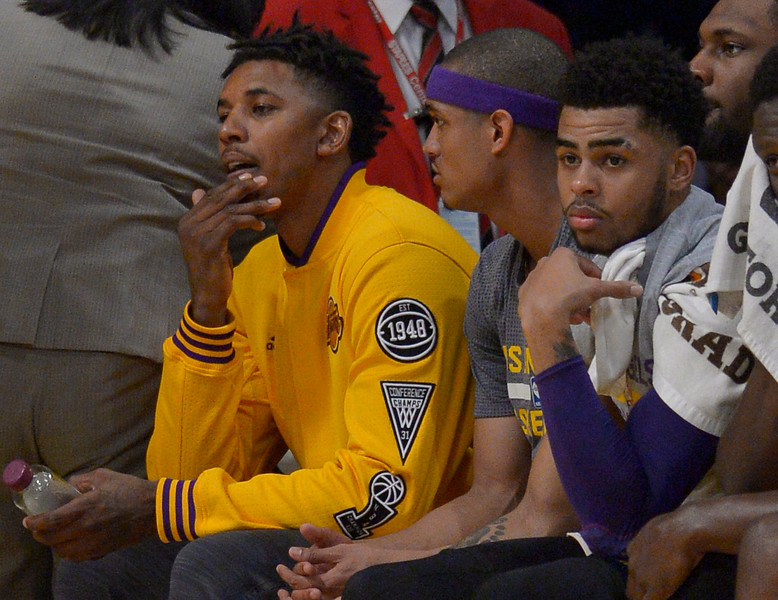 The Lakers gathered around for a talk, and the topic veered away from the discussion that usually involves basketball.

Instead, Lakers rookie point guard D’Angelo Russell expressed his regret over secretly recording a video that went public of teammate Nick Young admitting infidelities while being engaged to rapper Iggay Azalea. As Lakers guard Jordan Clarkson recalled, Russell “looked at us like men” and showed remorse for his behavior before the Lakers’ 102-100 overtime win over the Miami Heat on Wednesday at Staples Center.

“Everybody accepted his apology,” Clarkson said. “He has to handle it from where it’s at right now. He has to stop worrying about everything. He just has to perform on the court.”

It appears Russell has to do more though than just overcome a 16-point effort on only 6-of-19 shooting against Miami with a key defensive stop on Dwyane Wade to force overtime and a clutch 3-pointer in extra regulation. Various sources have said Russell and Young have addressed the incident since the video went public last Thursday. Russell said in a pre-game press conference that he “reached out to” Young and “let him know my apologies.”

But a source close to Young has remained adamant that Russell has not apologized directly to Young. By Young’s own choosing, the source added Young was not present when Russell addressed the team before the game on Wednesday.

“I don’t know if they were accepted,” Russell said of his apology. “If not, I wouldn’t blame him.”

As of now, Young has not accepted any apology. Young also declined to field questions from reporters before the game and only offered a statement that lasted for about a minute.

“I don’t want to get into my personal life right now,” Young said. “I think it’s best me and D’Angelo handle the situation we have in a private manner outside of the media. I think it’s something we do need to sit down and talk about. That’s about it. What happened is what happened. We have to work on it.”

Nonetheless, it sounds like Russell has made progress working on building inroads with the rest of his teammates.

Although Clarkson said that “nobody is shunning nobody,” multiple sources familiar with the Lakers’ locker room dynamics said that several of Russell’s teammates became distrustful of him after violating an unwritten rule about making details about anyone’s private life public even if it was unintentional.

Said Clarkson: “That’s still my teammate and backcourt mate. I’m going to be there for him, too.”

Said Randle: “Both of these guys have my support with their situation. But I’m not getting into it. That’s their personal situation. I’m not going to deal with it.”

When informed about that olive branch, Russell said “it means a lot.” He added, “I really appreciate them saying that.” Russell also expressed appreciation for both his dad and Kobe Bryant stressing to him that “you got to just play.” Bryant also said in a half serious, half joking manner that he imitated Yoda by saying, “One day pass, this shall.”

“It’s unfortunate, man,” Bryant said. “It’s tough. There’s a lot to learn from that. I’m sure he will evolve, will grow and will be better from it. I don’t think there’s much he can do about it now outside of the countless apologies. There’s nothing anything else he can do other than continue to perform and win the trust of his teammates and peers.”

During his 2003 sexual assault case that was eventually dismissed, Bryant told police about Shaquille O’Neal’s apparent indiscretions. Following Phil Jackson’s initial departure from the Lakers, he wrote a book that described Bryant as “uncoachable” and negatively portrayed his personality. The incidents do not exactly compare to Russell’s, who uploaded his video on what he thought was a private Snapchat account only to realize it soon became public domain.

Yet, Bryant still etched out a Hall-of-Fame career despite the turmoil surrounding him.

“There’s a lot of things in life you can’t control,” Bryant said. “The things you can control, you try to do to the best of your ability. Your personal life might be going to [hell]. But that doesn’t mean the game is. You have to win something. You lose on the court and it makes your day really awful.”

The beginning of Russell’s day on Wednesday seemed awful.

A large media gathering arrived at the Lakers’ practice facility in El Segundo eager to talk to Russell. After completing an extended workout session, Russell walked past reporters without missing a step and said “there’s nothing to talk about.” Soon after, three security guards walked along with Russell as he exited the Lakers’ practice facility to his car in the gated parking lot.

When Russell heard his name in lineup introductions, he also heard boos from the same fans that initially cheered his arrival as the Lakers’ No. 2 draft pick. Yet, Russell insisted he “knew that was going to happen.”

“I can’t really show my face anywhere without people hating me right now,” Russell said. “I try to handle it the right way and remember why I’m here. That’s basketball.”

The more Russell plays well, the more he will experience feel-good moments during a frustrating time. It could also provide an outlet for the anxiety he has felt in recent days. In a sport defined by on-court chemistry, however, Russell’s success could hinge on how well he mends fences.

“This shall pass. He still has to go out there, perform and play well,” Lakers coach Byron Scott said. “His teammates will gravitate toward him if he says all the right things and does all the right things. If he doesn’t, then it’s a big failure. This obviously has gotten his attention.”

It has also gotten the Lakers’ attention. That explains why the normally confident Russell humbled himself in front of his teammates beforehand, hoping those open vulnerabilities would lead to a stronger bond.

“I think the guys are understanding,” Bryant said. “We’re all human beings. I don’t think we can hold anybody to strict judgement. Everybody makes mistakes. If we’re being honest with ourselves and seriously self assessing, we’ll realize we’ve all made mistakes and made massive ones at times. The important thing is to show compassion, empathy and help him grow and help him grow as a team and a unit.”

That growth will remain a work in progress, with the first step involving reducing the tension between Young and Russell. Teammates sat between them on the bench on Wednesday. And it appears unclear when or if Young will ever become as forgiving as some of his teammates have regarding Russell’s behavior.

“You can’t undo the damage that has been done,” Russell said. “All you can do is stay apologetic from your heart and show how much you care and how sorry you are for your teammates and putting them through something like this that could tear a locker room apart. That’s all on me. It’s my job to let guys know I messed up and you have to bounce back from it.”