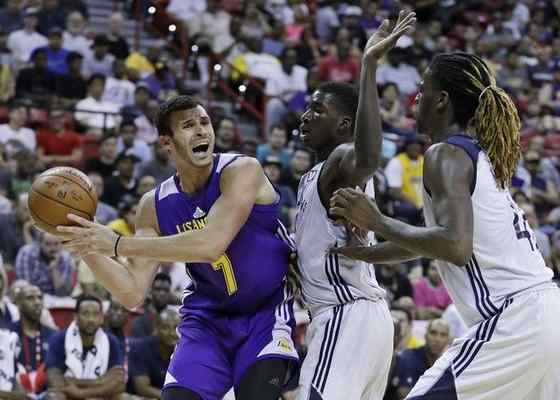 Nance took a hard fall in the waning seconds of the Lakers’ loss to Cleveland on Thursday. Nance then had x-rays that indicated a probable fracture. But Nance traveled to Los Angeles to visit Lakers physician Dr. Steve Lombardo and hand specialist Dr. Steve Shin of the Kerlan-Jobe Orthopaedic Clinic on Friday for further clarity.

Nonetheless, Nance’s injury sparks uncertainty to what degree it could compromise his offseason regimen.

Nance, who the Lakers drafted 27th overall in the 2015 NBA draft, hoped to further develop his mid-range jumper and 3-point shot. He only attempted 6 shots from 3-point range and made 2 of them, partly because he did not want to force those shots. He also planned to spend the rest of the summer improving his shot.

Nonetheless, the Lakers’ second-year forward had already shown growth in summer league with his dependable energy plays, averaging 9.0 points on 48.1 percent shooting and 7.8 rebounds. Nance also became a leader through his hustle as well as offering positive and negative reinforcement to teammates.