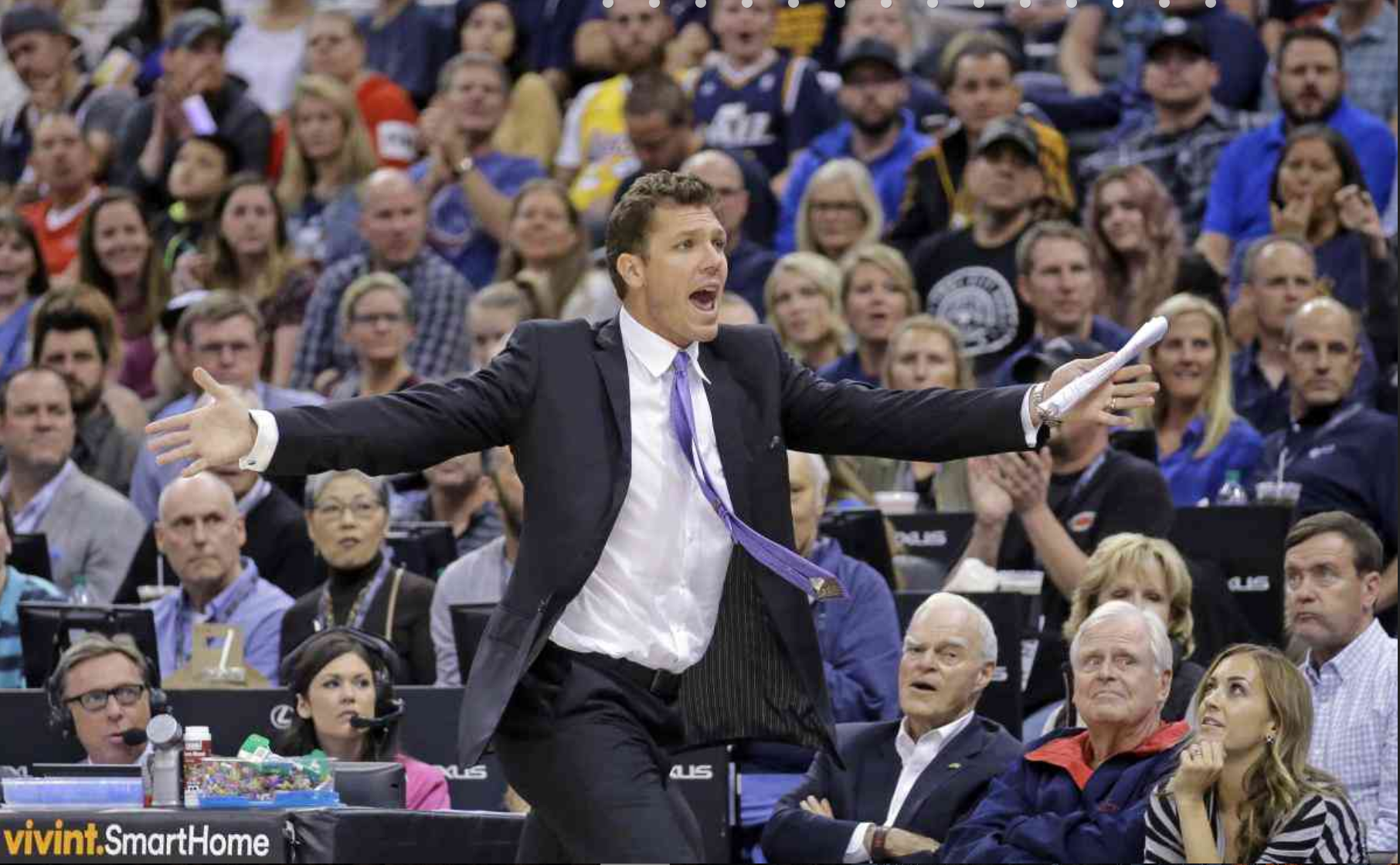 Lakers coach Luke Walton reacts to a call during the second half of his team’s 96-89 loss to the Jazz on Friday night in Salt Lake City. AP Photo/Rick Bowmer

SALT LAKE CITY — The man in charge has stayed patient as he has explained concepts to a young group that still needs time to fully grasp them. He has displayed his appealing personality by treating everyone as equals, empowering his players with positive reinforcement and offering good-natured teasing.

But for all the approaches Luke Walton’s upbringing and coaching style has mirrored Phil Jackson with his calm approach, Walton has emulated one of his mentors in another way. Walton did not hesitate in offering honest critiquing toward the officiating in the Lakers’ 96-89 loss to the Utah Jazz on Friday at Vivint Smart Home Arena.

First, Walton narrowed in on the Lakers committing 29 fouls that resulted in the Jazz going 28-of-40 from the free-throw line. Walton has decried the Lakers’ high foul volume in training camp, but Walton’s frustration pointed more toward the men in the black and white shirts than his players still learning defensive concepts.

“They shot 40 free throws, which is ridiculous to me,” Walton said. “But that’s kind of what happens when you play here in Utah.”

Walton then questioned why officials retroactively discounted a Jordan Clarkson 3-pointer in the third quarter after a review of the play showed he stepped out of bounds.

“I have to look on the rules on that. That made no sense to me,” Walton said. “If that’s the case, you should just review entire the game all day long. Anytime you miss something, keep coming back and take stuff away. That doesn’t make any sense to me.”

According to the NBA rulebook, a review of a play is allowed if “officials are not reasonably certain whether a successful field goal was scored correctly as a 2-point or 3-point field goal.” The rulebook also states that a replay is permissible if “officials are not reasonably certain as to which of two players on teams caused the ball to become out-of-bounds during the last two minutes of the fourth period or the entire overtime period(s).”

The Lakers’ play in question appears to be a unique circumstance. The play took place in the third quarter, not at the end of the game. Though officials can look at any play to determine a possible discrepancy between a 3-pointer and a jump shot, the rulebook does not suggest they can retroactively determine an out-of-bounds play.

“From my understanding, they can only say if he was on the line or not,” Walton said. “Before he caught the ball, they say he stepped out of bounds. So the basket wasn’t good. I didn’t’ know that was a rule. If there is a rule, there should be a monitor on the sidelines for the entire game. Anytime someone does that and anytime they miss a call, they just go back and take points away. I don’t see how certain plays you can take points away and not others. They’re all just as valuable.”

Jackson often questioned officials, particularly before and after playoff games, both to deflect criticism toward his players and to pressure officials on how they will handle their whistles in future games.

Yet, Walton stressed that “Utah earned that win” and described the Jazz as “well coached.” Walton also decried the starters poor chemisty, which included going a combined 15-of-44 from the field. Walton also cleared his bench early in the third quarter because of the starters’ lack of energy to open the second half.

But just as Walton defended his players for sparking so many whistles, those same players criticized themselves for how they reacted to them.

“It’s frustrating when things are not going your way and calls aren’t going your way,” Lakers guard Nick Young said. “We just have to learn from this, build off of this, don’t get no more techs and try to leave the refs alone, man, as best as we could.”

Easy to say. Hard to do.

Lakers forward Julius Randle and Lakers center Timofey Mozgov both collected technical fouls, which will result in each paying a league-imposed $2,000 fine. It’s not clear what prompted Mozgov’s technical. But Randle received feedback after politely pleading his case to officials.

That also happened to be what dominated most of the talk in the Lakers’ locker room. As much as Russell provided positive reinforcement to Randle as they walked off the floor, the Lakers’ second-year guard looked down as he sat by his locker. After lamenting the calls, Lakers forward Luol Deng soon approached him and started providing undisclosed feedback.

“When things get a little adverse, sometimes you have a little macho man in you. Sometimes you want to yell at the referees,” said Lakers guard Lou Williams, who had a team-leading 17 points on 6-of-12 shooting. “Just find your balance and learn how to play through adversity. When you’re not making shots and not getting calls, play through it.”

The Lakers almost did before falling short at the end. Moments later, Walton spoke the thoughts many of his players harbored on the officiating. Walton will soon find out if the method works to his advantage as it once did for Jackson.