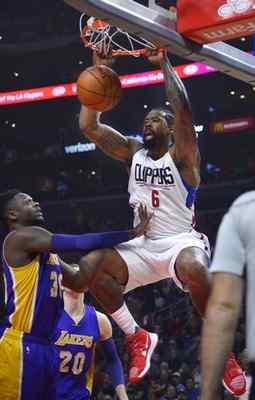 LOS ANGELES — The tactic contradicts Luke Walton’s belief in defenders taking pride in both guarding their man and helping out on rotations. The strategy also disrupts Walton’s hope to see a game played at a swift pace.

So when the Lakers’ prepared for their designated road game against the Clippers on Saturday at Staples Center, the Lakers coach did not tell his players to intentionally foul DeAndre Jordan to expose his poor free-throw shooting. But after the Lakers suffered a 113-97 loss to the Clippers that entailed Jordan posting 24 points on 12-of-13 shooting and 21 rebounds, Walton admitted, “It’ll be nice to foul him every once in a while.”

Jordan had only one free-throw attempt, which he missed on a three-point play. He made his first 10 shot attempts. He threw down nine dunks.

“DeAndre is a hell of a player and he gets stuff done out there,” Walton said. “But his weakness is shooting free throws.”

Instead of exposing Jordan’s low marks from the foul line this season (51.7%) and his eight-year NBA career (42.9%), the Lakers allowed Jordan to become the first player to log at least 20 points and 20 rebounds against them since Orlando forward Tobias Harris posted 28 points and 20 rebounds on Jan. 24, 2014.

So why didn’t the Lakers wrap Jordan up?

The Lakers failed to do that. Lakers forward Tarik Black wrapped his arm around Jordan, but that happened after he had already muscled his way toward the basket.

Yet, Lakers guard D’Angelo Russell declined to put too much blame on the team’s interior defense. After all, the Lakers’ perimeter defense has often given their frontcourt players more work on help defense. Russell did little to stop Clippers guard Chris Paul from posting 20 points on 7-of-15 shooting and 13 assists.

“It’s all around,” Russell said. “It’s not interior. Everything has to be better.”