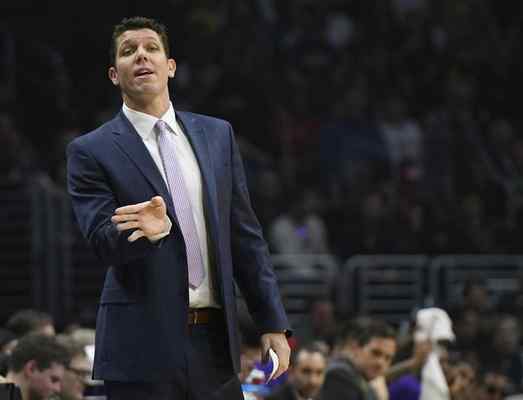 EL SEGUNDO — The unspoken words told Lakers coach Luke Walton that Lakers guard D’Angelo Russell and Lakers forward Julius Randle would not sulk about sitting out in fourth-quarter stretches. Their effort in Wednesday’s practice showed Walton they will channel any frustration with diminished playing time productively on the court.

“There was also a nice feistiness to practice with guys getting after it,” Walton said. “I would hope some of that would be some people being upset they weren’t playing.”

Only 10 days ago, Walton had praised Russell and Randle for their improved play, work habits and consistent work habits. Though Walton argued their performances mostly dictated the Lakers’ success, Russell and Randle sat out final 19 minutes and 33 seconds of Tuesday’s 127-121 loss to Denver Nuggets at Staples Center.

Russell has five points on 2-of-9 shooting and three assists in 17 minutes, concluding a five-game stretch in which he has shot 32.8 percent from the field and 11.1 percent from 3-point range. Though he did not talk after Wednesday’s practice, Russell criticized his play after Tuesday’s loss and praised Walton for sitting him. Yet, Walton said he did not bench Russell as a way of “dangling a carrot” to motivate him.

“It’s never about ‘This what you need to do so this is your reward,'” Walton said. ‘This is what you need to do because this is what’s right, this is what we need out of you and this is how we become a better team.’ It’s not about the end result. It’s about what he’s doing possession by possession to start the game. Then if that all happens, naturally he’ll be in at the end of the game because of the way he’s playing.”

“It wasn’t about me; I wanted my team to win,” Randle said. “Those guys did a heck of a job coming out there and giving us a good work ethic and stayed locked in. I was ready when my number was called, but it wasn’t about me. I wanted us to get the win.”

Still, Randle admitted afterwards he wants to play in the fourth quarter. So, Walton noticed Randle had a “nice edge” in Wednesday’s practice. Randle said he wanted to “try to build so it translated” into Friday’s game against Indiana at Staples Center.

“When he plays with the edge and mindfulness of not fouling,” Walton said, “he’s a heck of a player.”

If not, Walton said he will not hesitate closing out with other players that fit that description. Although he had contended on Tuesday that he had never pondered changing his starting lineup beyond injury and rest purposes, Walton softened his stance on Wednesday. The Lakers have used 14 different starting lineups, though it has always featured Russell, Young, Luol Deng, Randle and Timofey Mozgov when available.

“It could get to that, for sure,” Walton said. “We’re not there yet. We’re not sitting in the staff meetings talking about making a full chance to the starting lineup. But like we preached, nothing is guaranteed. There’s no Kobe Bryant out there that’s going to start no matter what because he’s earned it and put in that time. We have a bunch of young guys that we’re developing. We like our starting group. We think they’re going to be fine. But obviously you never rule anything out.”

Why Lakers’ Luke Walton has not considered changing his starting lineup