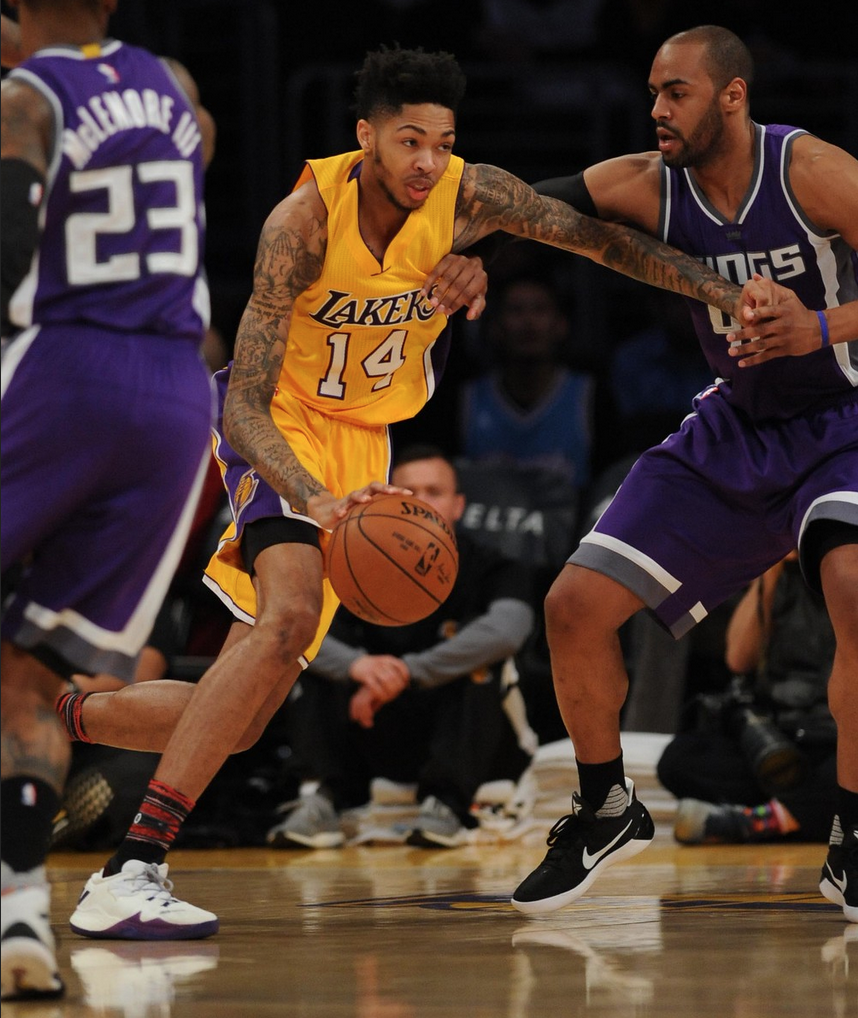 The Lakers have seen him both grow and shrink. But lately, Lakers rookie forward Brandon Ingram has mostly stayed on the court in crunch time so he can fully blossom.

The Lakers have seen him show both flashes of greatness and inconsistency. But lately, Lakers second-year guard D’Angelo Russell has mostly sat on the bench without an opportunity to provide a happy ending.

While Ingram and Russell might represent two key pieces of the Lakers’ young core, they also represent contrasting views on how Lakers coach Luke Walton wants to develop them.

In the Lakers’ 97-96 loss to the Sacramento Kings on Tuesday at Staples Center, Russell sat out the entire fourth quarter after logging only eight points on 3-of-9 shooting and committing more turnovers (five) than assists (one). In the past four games, Russell has not cracked the 30-minute threshold. And though Russell has felt more empowered with Walton’s free-flowing offense and a starting position that has never been yanked other than injuries, Russell has logged less playing time under Walton (26.4 minutes per game) than during his rookie season under former Lakers coach Byron Scott (28.2).

Russell said afterwards he has not talked with Walton about this reality.

“He pretty much goes with who’s really playing well at the time,” Russell said. “And that’s the best way you can go about it.”

That’s not exactly how he has gone about it regarding Ingram, though.

He had six points on 2-of-7 shooting against Sacramento in what marked his fourth consecutive start. Though Walton played veteran forward Luol Deng for most of the fourth quarter as the Lakers’ reserves made a fourth-quarter run, Walton featured Ingram for the final 3:48 for what he called “experience purposes.” Though Ingram went scoreless, he still logged a plus-minus rating of +6 in a statistic that measures a players impact on the floor.

“Every chance we get him to feel what it’s like guarding different players, being in when you’re down 15 [points] and being in when you’re up 15 or in a one point game with two minutes to go…,” Walton said, trailing off. “All that at this level, he hasn’t been a part of. Seeing how much more physical the game is, that’s something we need to get him now. So when he trains this offseason, he knows what to expect moving forward in his career.”

Walton still plans to start Ingram and Russell when the Lakers (19-38) visit the Phoenix Suns (17-39) on Wednesday at Talking Stick Resort Arena. But whether Russell closes the game out remains unpredictable. While Ingram has led the Lakers in total minutes (1,575), Russell has averaged 6.0 minutes in the final period this season. While Russell has missed 16 games because of various leg injuries, he has also experienced eight healthy scratches in the entire fourth quarter this season.

Walton cited various factors that kept Russell off the floor in the fourth quarter against Sacramento. Lakers reserve guard Lou Williams scored 19 of his team-leading 29 points in the fourth quarter. Walton wanted to reward third-year guard Jordan Clarkson with more playing time as he finished with nine points on 4-of-8 shooting and seven rebounds. While Julius Randle also sat in the entire fourth quarter, center Tarik Black, forward Larry Nance Jr. and center Ivica Zubac showed both promise with energy and struggles with defense as Kings center DeMarcus Cousins finished with 40 points and 12 rebounds.

“It was rewarding the players that started playing together,” Walton said, “bringing the energy, attacking on defense and making plays is the reason we left them in.”

Even as Russell has stumbled, though, Walton has lately resisted allowing him to get himself up for another reason.

“D’Angelo knows what it’s like,” Walton said. “He’s played all of last year and this year. He’s been in clutch games and has been in blowouts.”