LOS ANGELES — The players’ stoic nature allowed him to hide in anonymity. His relentless aggressiveness and consistent efficiently soon became hard to ignore.

Lakers rookie forward Brandon Ingram has tried to apply those concepts in hopes that his game will speak louder than his occasionally mumbled words. This time, though, Ingram saw how those qualities came at his expense.

San Antonio forward Kawhi Leonard initially bullied Ingram on nearly every spot on the court, as he attacked the basket and drained outside shots with ease. Hours later, the Lakers suffered a 125-98 loss to the Spurs on Sunday at Staples Center as Leonard posted a team-high 25 points.

Afterwards, Lakers coach Luke Walton still called Ingram “one of the few bright spots” after he posted a career-high in points (22) and field-goals made (10-of-15 from the field) in 35 minutes. Yet, Ingram still faulted himself after Leonard “gave me a wakeup call” as he scored 16 first-quarter points. That stretch matched Leonard’s best quarter of his six-year NBA career.

“He got everything he wanted,” Ingram said. “I don’t think any player should have 16 [points] in the first half. That was a big part of me.”

Walton did not sound as critical. He contended that Ingram did a “decent job” on Leonard and chalked up his prolific play to “just hitting shots.” Ingram saw things differently, though.

“I don’t think I did a good job of taking up his space,” Ingram said. “He had a clear view of his shots and I didn’t use my length well until the second half. I think that was a big part about it.” 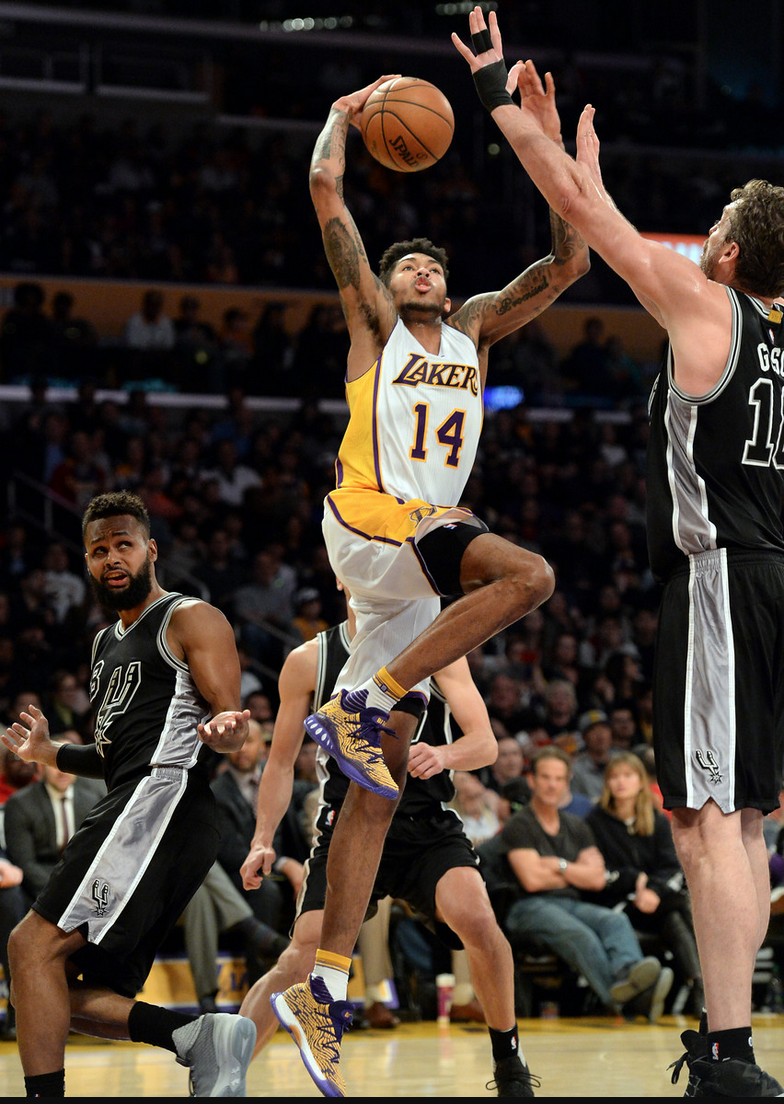 A big part of Ingram’s resurgence, though, stemmed from mirroring Leonard’s game. He became aggressive defensively, as he helped hold Leonard to a 3-of-10 clip after his strong first-quarter start. He followed through on recent advice from Magic Johnson and season-long advice from the Lakers’ coaching staff on attacking the paint as he finished 6-of-7 in that area. Meanwhile, Walton saw Ingram “shooting with more confidence.”

“The way he attacked in the first half and in the second half is the way and motto how I should attack each game. He definitely woke me up in that first half. He was aggressive,” Ingram said of Leonard. “Every night he goes out and does everything on the floor. He attacks the same way and is comfortable with every shot he takes.”

Ingram would hardly describe himself that way.

He has averaged 8.3 points on a 37.2 percent clip because he believes he not always shown the needed aggressiveness and focus. Yet, Ingram also has shown resemblances of Leonard by striving to master various facets of his game, including his shooting, post play, ball handling and perimeter defense. Despite his stoic nature, Ingram switch has also turned on at times, including when he threw down a one-handed dunk over Spurs forward Pau Gasol.

“You could kind of be a little shell shocked,” Walton said regarding Ingram’s play on Leonard. “But I thought Brandon did a great job of staying engaged, embracing that challenge and stepping his own game up.”