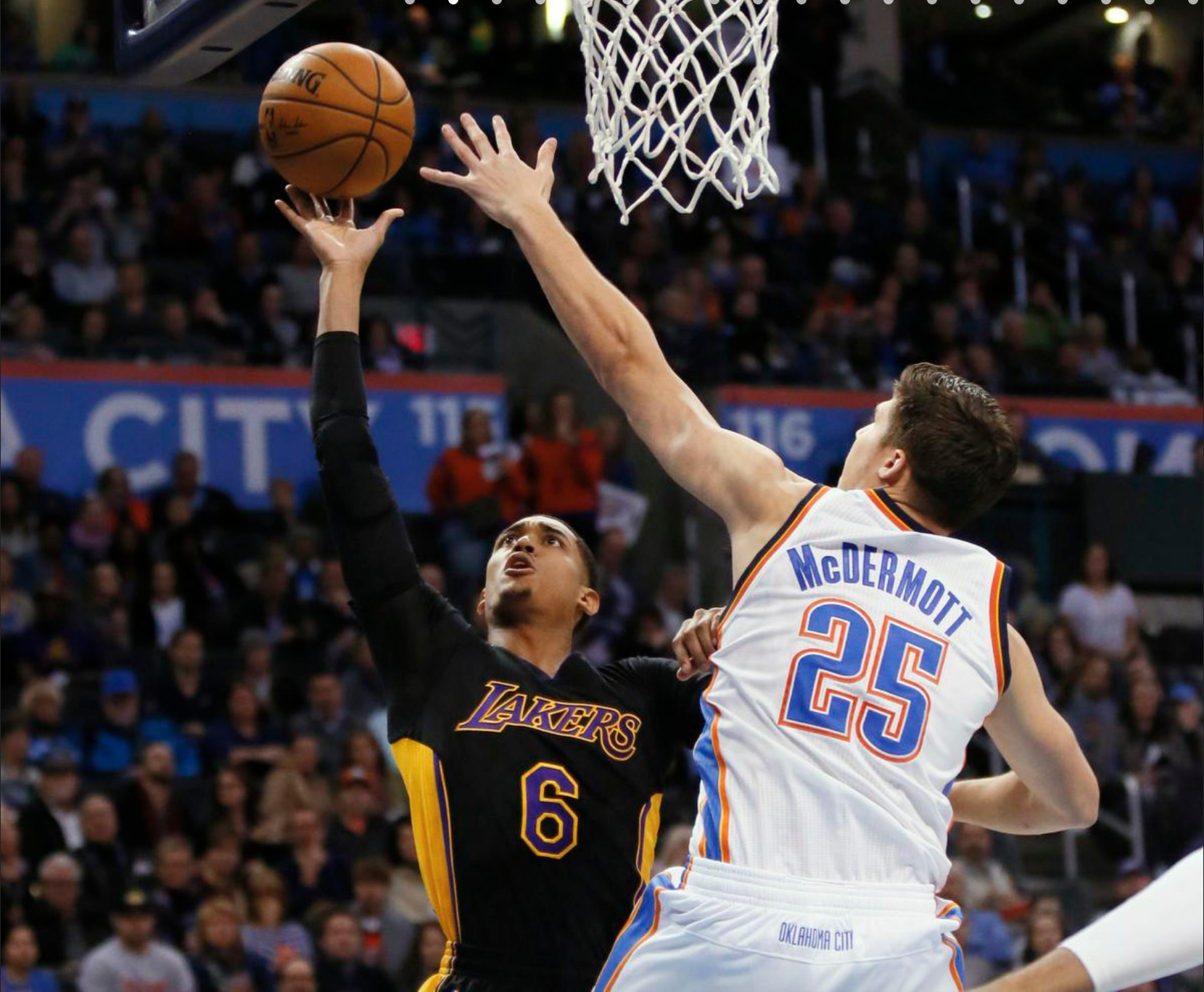 OKLAHOMA CITY — The job description seemed nearly impossible to fulfill. Find a way to stop Russell Westbrook. Slow him down. Contest his shots. Do anything and everything to prevent Westbrook from achieving the inevitable.

So with the Lakers suffering a 110-93 loss to the Oklahoma City Thunder on Friday at Chesapeake Energy with Westbrook posting his 28th triple double of the season, on paper it appeared the Lakers failed to live up to the task. Westbrook posted 17 points, 17 assists and 18 rebounds. Magic Johnson, the new president of the Lakers’ basketball operations, watched Westbrook accomplish something only Johnson and Rajon Rondo did in the last 40 years. All of those had a game in which they logged at least 17 points, 17 rebounds and 17 assists.

Yet, Lakers coach Luke Walton found satisfaction that the Lakers forced Westbrook to be more productive at the foul line (8-of-9) after disrupting his efficiency from the field (4-of-18). Walton said that Lakers guard Jordan Clarkson “really battled” in ensuring Westbrook did not always score as quickly as it takes for him to run across the court.

“We did a good job on him,” Walton said. “Honestly that’s what you do to superstars. You make it hard on him.”

And as the Lakers strive to fix a problem that has plagued them all season, both Walton and Johnson have called on Clarkson to carry the defensive load. Johnson reiterated Walton’s proclamation in training camp that Clarkson could “become an elite defender.”

“I feel like I have the ability to do that,” Clarkson said. “I’m quick and able to guard in the post.”

Yet, Clarkson has matched those abilities enough as the Lakers have fared 27th out of 30 NBA teams in points allowed (110.7), 29th in defensive field-goal percentage (47.9) and fast-break points allowed (15.5). As for Clarkson, NBA.com lists him as 315th out of 464 players on total defense. Clarkson has a defensive rating of 110.5, meaning that opponents score that many points per 100 possessions anytime Clarkson logged playing time. Overall, opponents shot 44.5 percent from the field on shots that Clarkson contested. Though Clarkson showed relative improvement from last season in defensive field goal percentage (62.5), his current defensive rating nearly mirror’s last season’s mark (111.5).

“His defensive numbers are not very good. But he’s got the quickness,” Walton said. “He’s going to continue to get stronger. I think that’s going to help him a lot too. We ask him to guard multiple positions. Sometimes the guy he is guarding is bigger. But as far as his explosiveness and aggression and competitive level, I think he’ll be a good defender the older he gets and stronger he gets.”

Clarkson, who is listed at 6-foot-5 at 194 pounds, has spent recent summers bulking up with strength and conditioning coach Tim DiFrancesco and personal trainer Drew Hanlen. Clarkson also worked on various defensive fundamentals regarding his stance and how he reads rotations. But that has not translated right away. Though Clarkson is known more as a scorer (13.7 points on 44.9 percent shooting), he downplayed whether that strength has come at the expense of excelling on the other end of the court.

“I’m taking that to heart,” Clarkson said. “It’s going to take us some time. We’re all still young and growing. I feel like I can do it though.”

Clarkson did some of it on Westbrook. But as Clarkson discovered, the definition of his defensive success will not always become transparent on the box score.

“They run a lot of the offense through him and he has the ball in his hands a lot during the game,” Clarkson said of Westbrook. “You always have to be alert. He’s going to make shots and make plays for his teammates.”