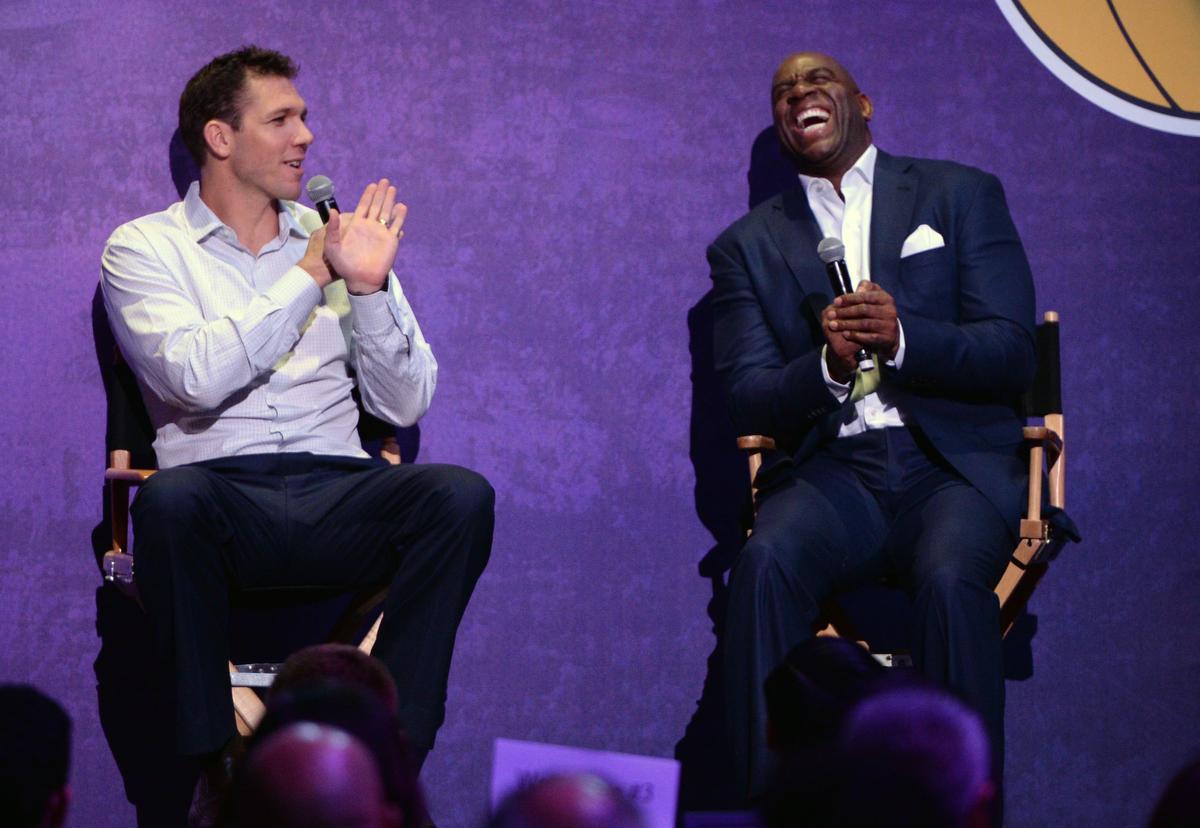 LOS ANGELES — From up above, Magic Johnson imposed a towering presence as he sat on a balcony overseeing the practice court during Monday’s session. Down below, Johnson’s stature has loomed large as he has offered players individual instruction.

As the Lakers’ new president of basketball operations, Johnson has wasted little time stamping his imprint on a team he once led to five NBA championships during the Showtime Era. He became involved with the trade deadline. He traveled with the Lakers for their two-day trip to Oklahoma City where he dined with the Lakers’ coaching staff, watched practice and provided feedback. He did the same thing during Monday’s training session in El Segundo.

Even with how much he has exerted his influence thus far, Johnson maintained he has his limitations. During the Lakers’ 13th annual All-Access event on Monday at Staples Center, Johnson pledged he would “never interfere” with Lakers coach Luke Walton, “his players and his coaching.”

“It’s been really easy. This man is the coach of the Lakers,” Johnson said, pointing to Walton sitting beside him on stage. “I’m not the coach. He is the coach. I sit back and I just watch games, I watch practice. His job is to coach. I may come to him and say, ‘So and so needs to work on this.’ I’ve done that a couple of times. But that’s up to him.”

For example, Johnson provided some observations during Thursday’s practice in Oklahoma City to Walton about Lakers rookie forward Brandon Ingram. The feedback entailed how to use his 6-foot-9, 190-pound frame on defense and on pick-and-rolls. So Walton immediately thought, “Please go tell him that.” Moments later, Johnson pulled Ingram to the side and showed him various techniques.

“If I’m a 19 year old player and my coach is telling me something, you’re going to listen,” Walton said. “But it doesn’t mean as much if a teammate says something or if Magic Johnson comes and says, ‘Hey when you turn that corner, look when you do this.’ If it’s me, I’m going to the gym that night and practicing for five hours straight.”

Walton also brought up how any potential awkwardness with Johnson would hardl compares toward playing with former Lakers guard Kobe Bryant from 2003 to 2012.

“Having Magic is great; I haven’t been cussed at. I haven’t been yelled at,” Walton said, laughing. “So even if he does, I still know how to do my job while getting screamed at.”

In an amused tone, Walton stressed after Monday’s practice that Johnson is not yelling “like a crazy Uncle” from the perch overseeing the practice court. Instead, Johnson has shown a more subtle approach, such as when he told Lakers associate coach Brian Shaw about providing unspecified feedback to Lakers rookie center Ivica Zubac. Ingram added he “wasn’t paying attention” on gauging Johnson’s reactions from up above during any good or bad moments during practice.

“Of course, he’s up there. But we stay between the lines,” Ingram said. “We worry about what’s going on in practice and we’re not paying attention [to up above]. We have coaches to yell at us. We try to focus on what’s in front of us.”

Meanwhile, Johnson said he has focused more on what’s going on behind the scenes.

The Lakers dealt veteran guard Lou Williams to the Houston Rockets for veteran small forward Corey Brewer and a first-round pick. While the Lakers also traded 32-year-old guard Marcelo Huertas to Houston for 22-year-old guard Tyler Ennis, the Williams deal seemed more significant for a few reasons. Though Williams led the Lakers in scoring with 18.6 points on 44.4 percent shooting, the Lakers traded him both to open up playing time for third-year guard Jordan Clarkson and to acquire another draft pick. Hence, the Lakers are hardly fretting over Williams averaging 24 points on 50 percent shooting through his first three games with the Rockets.

“Lou is very talented. That’s why seven or eight teams wanted him at the trade deadline,” Johnson said. “But Houston got what they wanted and we got what we wanted. What we wanted was more financial flexibility come the draft as well as free agency time. We got the flexibility I was looking for. Then we can utilize that pick any way we want to utilize it.”

Johnson also inquired about Indiana’s possible interest in trading star forward Paul George. The Lakers held off on making an aggressive push for two reasons, though. The Lakers did not want to gut their roster of young assets. The Lakers are mindful that George, a Palmdale native, could have interest in them once he becomes an unrestricted free agent in the 2018 offseason. Nonetheless, that backdrop provided a new spice to Johnson’s relationship with Pacers president Larry Bird after competing fiercely against each other in the Lakers-Celtics matchups during the Showtime Era.

Bird asked Johnson, “Are you crazy? Why are you getting in this?”

“We laughed about it,” Johnson said. “We only talked two or three minutes about possibilities of a trade. It was more geared toward later on, not at that moment. It was really just saying ‘Hi and looking forward to talking to you later on this summer.'”

The nature of any talks could hinge on how the Lakers (19-41) fare in their 22 remaining games, including Tuesday’s matchup against the Charlotte Hornets (25-34) at Staples Center.

It sounds like the Lakers are high on Ingram, whom Lakers president Jeanie Buss described “as a winner and a hard worker.” But Johnson and Walton narrowed their focus on Lakers second-year guard D’Angelo Russell, who has averaged 14.6 points on 39.8 percent shooting, 4.7 assists and 2.7 turnovers in 26.8 minutes per game. While he has shown some growth in his play, maturity and work habits, Russell has also become riddled with inconsistency. Yet, Walton maintained that Russell is “coming along nicely.”

“D’Angelo has a ton of talent,” Walton said. “He understands how to score the ball and understands how to pass and sees passing angles. With D’Angelo, we want him playing a more aggressive style. We want him pushing it up faster. We want him coming off of pick and rolls and then deciding what to do depending on what the defense is doing to adjust to him. We’re constantly nitpicking every little thing that he does. With all of our young guys, for the time being, it takes away from their game at times. They’re trying to do the right thing. That is where we’re trying to get. You can ask Magic about it. When you’re actually playing, you can’t think about the coach. It’s got to be instincts and quick decisions. We’re going to get there. But I think as we continue to harp on these things, it’ll start becoming habits.”

Johnson argued habits might start to form once Russell exerts a stronger leadership role, something he has admittedly evaluated with mixed results.

“D’Angelo is playing the toughest decision in the NBA in the point guard position,” Johnson said. “What I want to see is just for him to lead a little bit more. Just be a leader and take even more responsibility in terms of guiding. Sometimes when everybody is young, nobody wants to hold guys accountable. They want to be their friend.”

Johnson then recalled the infamous episode during his rookie season. After former Lakers center Kareem Abdul-Jabbar made a game-winning shot against the former San Diego Clippers in the first game of the 1979-80 season, Johnson immediately jumped into Abdul-Jabbar’s arms. Afterwards, Abdul-Jabbar sternly told Johnson in the locker room, “Rookie, come here! Don’t ever do that ever again! We have 81 more games.”

Johnson did not back down.

“‘Kareem, if you shoot a shot like that 81 more times, I’m going to jump in your arm 81 more times!'” Johnson recalled, laughing. “‘Hey this is how I play. I’m passionate. I love the game.’ I think that broke the ice between us.”

Russell has provided feedback to some of his teammates. During the Lakers’ loss to Phoenix on Feb. 15, Russell chewed Ingram out for a poor defensive assignment. Russell also had pointed feedback to rookie center Ivica Zubac after failing to catch an entry pass that led to a turnover. Russell has also occasionally huddled up his young and veteran teammates.

“Sometimes when guys are young, veterans think you’ll be passive,” Johnson said. “I wasn’t a passive guy in terms of being a leader. I understand how to lead, even when I was young as a rookie. The thing I want D’Angelo to do is take this team in his hands. No matter if I’m 21 years old, just lead. Those guys will appreciate that.”

So far, Walton said he has appreciated how Johnson has approached his job.

Said Walton: “I love the fact he’s around.”