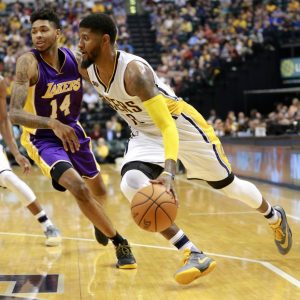 The Lakers would like to have Paul George. George shares the same feelings.

But forming a partnership could become complicated. The Lakers have had preliminary discussions with the Indiana Pacers about acquiring the 27-year-old forward and four-time All-Star, according to league sources. But it currently appears challenging the Lakers will reach a deal before the NBA draft on Thursday.

Although neither the Lakers nor the Pacers have discussed specifics on a possible deal, the Lakers have gone into these conversations holding firm on two things. They want to keep their No. 2 pick and second-year forward Brandon Ingram, something they have reiterated in previous calls they have both made and fielded in the past month.

The Lakers have not entirely ruled out trading their No. 2 pick. Yet, the Lakers like this year’s draft class after having workouts with UCLA guard Lonzo Ball, Kentucky guard De’Aaron Fox, Kansas guard/forward Josh Jackson and Washington guard Markelle Fultz. Though the Lakers have maintained they have kept an open mind about the NBA draft on Thursday, those in NBA circles strongly believe the Lakers will select Ball. He averaged 14.6 points on 55.1 percent shooting and a nation-leading 7.6 assists per game during his lone season with the Bruins.

As for Ingram, the Lakers have become most encouraged with his growth among the team’s young players. Although Ingram averaged 9.4 points on only 40.2 percent shooting and has a wiry frame, he has impressed the Lakers with his steady improvement with his positional versatility, defense, ball handling, aggressiveness and post play. The Lakers have also heard from draft prospects that they would like to play with him.

Though the Lakers want to hold on to their No. 2 pick and Ingram, it could become complicated trading either point guard D’Angelo Russell or forward Julius Randle. They share the same agent as George’s, Aaron Mintz, who is looking out for his clients’ best interests.

All of this leaves the Lakers in a precarious situation. They could wait for George to become an unrestricted free agent in the 2018 offseason in hopes of complementing him with a talented and, at that point, a further developed roster. Doing so leaves the Lakers vulnerable for another team to get involved. According to ESPN, the Rockets, Cavaliers, Clippers and Wizards are among the teams that have talked to the Pacers about George.

NBA draft: Lakers work out Gonzaga’s Zach Collins in case they get another first-round pick

Lakers’ Jordan Clarkson believes he can co-exist with No. 2 pick and D’Angelo Russell