EL SEGUNDO — The excitement swept over the Lakers as they selected a hometown point guard with their No. 2 pick that could transcend their franchise with his passing, leadership and marketing appeal. The Lakers did not just feel giddy over drafting UCLA guard Lonzo Ball, fulfilling the expectation that many Lakers fans, opposing team executives, and of course, Ball’s father, LaVar, predicted would happen.

The Lakers also believe they at least partially addressed their shooting and defensive needs with what they did throughout the rest of Thursday’s NBA Draft.

After trading center Timofey Mozgov and guard D’Angelo Russell to the Brooklyn Nets for center Brook Lopez and the No. 27 pick, the Lakers used that draft selection to secure Utah junior forward Kyle Kuzma. The Lakers then traded their No. 28th pick to the Utah Jazz for the 30th and 42nd selections. The Lakers then drafted Villanova senior guard/forward Josh Hart with the No. 30 pick, and then took Indiana sophomore center Thomas Bryant with the 42nd pick.

That left Lakers general manager Rob Pelinka “feeling grateful” for both acquiring additional picks and using those to fill various defensive and shooting needs. While the Lakers lost their two best shooters via trade (Russell) and opting out of a $5.7 million player option (Nick Young), the Lakers have also ranked last in several defensive categories in recent seasons.

“We’re thrilled with the players,” Pelinka said. “Big, big night for the Lakers. We’re just thrilled to be in this position.” 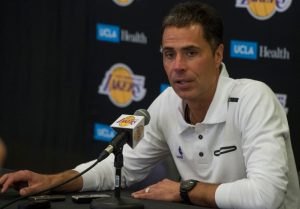 Pelinka then shared what he liked about each player.

The Lakers’ general manager said that Kuzma had “extraordinary workouts for us,” called him a “versatile player.” and said he “has a grit to him.” The Lakers walked away impressed with Kuzma during his interview at the pre-draft combine last month in Chicago when he shared his nutritional habits and training, something that has appealed to a Lakers front office that has stressed to each player about improving their conditioning and body fat percentage.

[Lakers coach Luke Walton] “was really wanting us to try to find guys that could play multiple positions, and we feel like Kyle’s a perfect example of that versatility,” Pelinka said. “He just has an energy about the way he plays with his length. We’re just really, really thrilled to have him.”

Kuzma sensed that too, saying the “Lakers were the best vibe I had with any team in this process.” After recording 15 double-doubles last season and making the All-Pac-12 first team and All-Defensive team, Kuzma also received more positive feedback from the Lakers regarding his potential.

“At the combine, people pecked me as a late second-round guy. They saw me differently,” Kuzma said. “They said me if I did well at the combine, they saw I could potentially be a first-round pick. I guess it’s all right. I’m a guy that’s versatile and can do many things and contribute to winning basketball.”

“I know what I can bring,” said Kuzma, who averaged 16.4 points on 50.4 percent shooting and 9.3 rebounds his junior season. “I know that’s a lot of energy; a lot of versatility. I’m a guy that can pass, shoot, rebound and defend. I can do a lot of things well. I don’t really necessarily do things great. But I’m a winner. I know how to win.”

The Lakers view Hart through a similar lens.

Pelinka called Hart a “champion,” and the description wasn’t just an empty cliche. He led Villanova to an NCAA championship his junior season. Hart then won the Big East Player of the Year and Defensive Player of the Year honors his senior season. Pelinka echoed the thoughts of NBA talent evaluators that praised Hart for his hustle, shooting and defense that enabled him to excel at the shooting guard and small forward positions.

“When he’s on the court, there’s just a presence of respect about him because he respects the game,” Pelinka said of Hart. “We know he’s going to come here and work as hard as any player on our roster and just drive the guys to be better. He’s a two-way player. He has a knack for making big plays and big shots. And, of course, having won a championship in college, he’s going to bring that mentality. Really, I think he can become a great young leader and influence on the other guys we drafted since he’s a little bit more mature than some of them.”

Pelinka then zeroed in on the 6-foot-10, 245-pound Bryant, who he considered a “true stretch five” that can both make outside shots and defend at the basket. With a 7-foot-3- wingspan, Bryant averaged 12.6 points and 6.6 rebounds while shooting 51.9 percent from the field and 38.3 percent from 3-point range. He also earned Third Team All-Big Ten honors for his freshman and sophomore seasons for his ability to do everything.

“With his length around the rim, he’s disruptive,” Pelinka said of Thomas. “But when he steps out at the top of the key, you have to guard him. He has a beautiful 3-point shot. I think he’ll be able to help us defensively as a rim protector. Then he’s opening the floor as a shooter. When he came in for his draft workouts, one of the things that stood out was he was in extraordinary shape.”

Not only did that appeal to the Lakers’ quest to have sharply conditioned players. It tied into why the Lakers selected Ball as their point guard.

“We feel like he’s the complementary piece we drafted,” Pelinka said of Thomas. “If you think about Lonzo getting in seams, breaking down players and passing and having a stretch player like Thomas Bryant to open up the court, it really is an exciting combination for the future.”

That exciting combination often made Kuzma joke around with people in his inner circle about Lonzo, who he called “the best player in the Pac-12.”

“If I had a point guard like Lonzo, I would’ve been higher in the mock draft,” Kuzma said. “I’m excited to play with him. It should be really fun. He gets people involved. He gets the ball to his guys. It’s great.”

The Lakers seemed to feel just as encouraged about their other draft picks, which could fill at least some of the endless list of needs as the team continuously seeks to address other ones.

Lakers select Lonzo Ball with No. 2 pick in NBA Draft