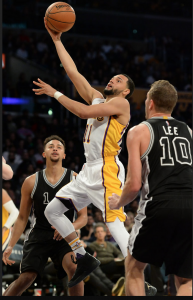 After struggling to find security in the early part of his NBA career, Tyler Ennis received some encouragement during the initial stages of free agency.

The Lakers were among the teams that expressed interest in the 22-year-old Ennis after free agency began on Friday night, according to a league source familiar with the situation. It’s not currently clear which of the other NBA teams also reached out. Discussions were considered preliminary, the source added.

Ennis also fills some of the Lakers various needs. The Lakers have considered it a priority to acquire shooters with D’Angelo Russell’s departure to Brooklyn and Nick Young opting out of his $5.7 million player option to become a free agent. With Ennis making a relatively inexpensive $1.7 million last season, the Lakers could sign him to a one-year deal to ensure cap flexibility for the 2018 offseason when LeBron James, Paul George and Russell Westbrook could become free agents.

Ever since the Phoenix Suns selected Ennis out of Syracuse with the 18th pick in the 2014 NBA Draft, he has had short stints in Phoenix (2014), Milwaukee (2014-16) and Houston (2016-17). Because of that history, Ennis told Southern California News Group last season that he would like some long-term stability. But Ennis also has affection for the Lakers granting him an extended role, as well as continuous support from Lakers coach Luke Walton, president of basketball operations Magic Johnson and general manager Rob Pelinka.