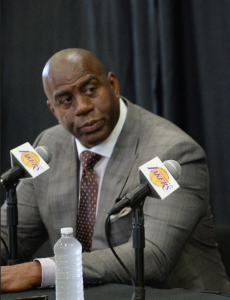 EL SEGUNDO — The Lakers are continuing their deliberative approach to free agency by bolstering their backcourt without compromising their long-term cap flexibility.

The Lakers spent Tuesday introducing their first and only free-agent acquisition in guard Kentavious Caldwell-Pope. Both Lakers president of basketball operations Magic Johnson and General Manager Rob Pelinka sounded patient on when they would make their next move. Pelinka estimated the Lakers are “going to complete the roster and fill out positions in the next week or two.”

“We’re looking to see what we’re going to do at that position,” Johnson said on Tuesday at the Lakers’ practice facility. “We’re hoping in the next week, week and a half we can fill that position. But right now we can’t tell you there’s a leading candidate.”

Later with a smaller gathering of reporters, Johnson said there are “five or six guys we’re considering” to fill a vacant back-up point guard spot. The most likely candidates, according to league sources, are either free-agent guards Ian Clark or Tyler Ennis through their “room” exception worth $4.3 million.

Clark could help the team’s outside shooting after averaging a career-high 6.8 points while shooting 48.7 percent from the field and 37.4 percent from 3-point range last season with Golden State. The Lakers view the 26-year-old Clark as a good mentor for rookie point guard Lonzo Ball after helping the Warriors win the 2017 NBA championship. After only playing four years in the NBA, Clark still could further cement his career with the Lakers should he have a productive season. Incidentally, the Warriors decided not to retain Clark and pursued Nick Young after he opted out of his $5.7 million contract with the Lakers to become a free agent.

Meanwhile, the Lakers have also expressed interest in the 22-year-old Ennis after he posted a career-high 7.7 points on 45.1 percent shooting and 2.4 assists in 17.8 minutes through 22 games following a mid-season trade from Houston. It remains to be seen if the Lakers hold firm on trying to find a more experienced point guard.

The Lakers currently have 13 players under contract for their regular-season roster, while also signing guard Alex Caruso to a two-way contract. The Lakers can field a maximum 15-player roster for the 2017-18 regular season, while holding two additional roster spots for players on a two-way contract. Lakers rookie center Thomas Bryant could be a candidate for a two-way contract, which would allow a player to spend up to 45 days with NBA team and the remaining time with its G-League affiliate. The Lakers and Southbay Lakers would split the costs on the player, depending on how long he is with each organization. The Lakers can fill out the rest of their roster with veteran-minimum deals.